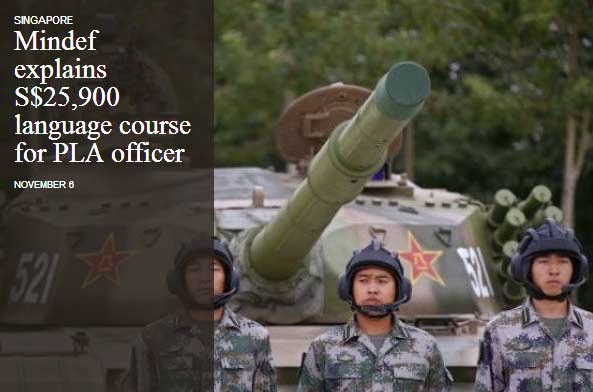 Defence Minister Ng Eng Hen's explanation for spending $25,900 on a language challenged People’s Liberation Army (PLA) officer makes you wonder if he was dropped on his head when he was a child. Or born stupid. Answering a question from Non-Constituency Member of Parliament (NCMP), he said the personalised, one-on-one, 360-hour course, was needed to get the officer to the level of proficiency conducted by a qualified English instructor.

The PLA is a big army, why did they have to select one that can't understand basic English? What's so special about this officer who can't find the way to the men's room without subtitles? Is he a PRC version of a White Horse, the type that makes general in 10 years, 7 years of which was spent in classrooms, scion of some powerful political family, destined to be the El Supremo of the whole damn country? That's $25,900 for English tuition, on top of free board and lodging, and probably several more thousands to acquire parade ground language proficiency in Malay. Oh, we forgot, this type won't be addressed in mono-syllabic expletives by some drill sergeant, or pass a basic marksmanship course. They'll probably assign a Pinoy domestic to carry his pencil box.

This waste of public funds reminds one of the hundreds of of "scholars" from PRC now learning English in Hwa Chung and the like preparatory courses before they proceed to 4 years of university and another 6 years of guaranteed employment. That's 11 years on taxpayers' money - another reason why they are holding on to our CPF? The outrage here is that our own teens can be denied a place in the same local universities if they fail to get a good grade for the General Paper. And those who do pass, will have to compete for jobs from these favoured foreigners.

With his pro-alien sentimentality, Ng should really be Foreign Minister. That way Singaporeans may not have to sent to harm's way in Syria or Iraq. When he expanded, “When our SAF officers go to other countries, they do the same in terms of spending some months to gain language proficiency,” he was alluding to the sweetener in language training courses. So that our men will understand what's happening to them when captured and interrogated by some foreign speaking jihadist.