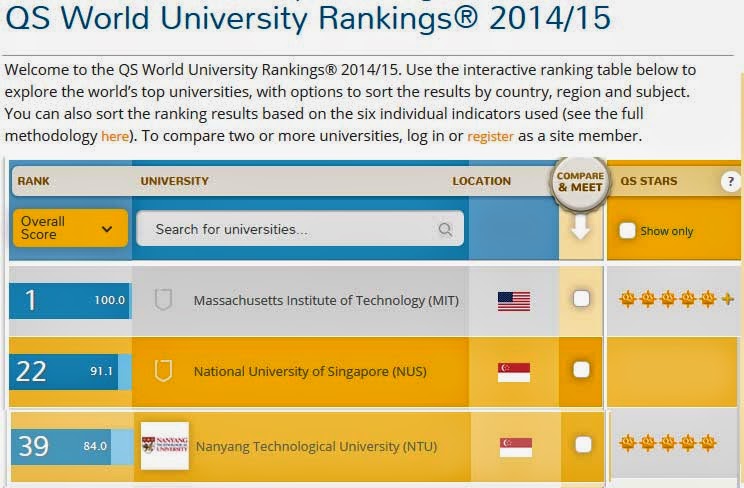 The Quacquarelli Symonds (QS) World University Ranking® is reputed to be the most widely read university comparison of their kind. In addition to exploring the world's top 800 universities overall, you can also compare the ranking of universities in a specific region, by subject area, or based on factors such as reputation or research citations. National University of Singapore (NUS) and Nanyang Technological University (NTU) have moved up 2 places in the 2014 World University Rankings – NUS is now ranked 22nd and remains the top Asian university, while NTU is ranked 39th.

NUS came in 39th place in a new ranking by international publishing company Nature Publishing Group this month (Nov 2014), making it the highest-ranked Singapore institution on the index. Highest in that NTU was ranked 42nd, while the Agency for Science, Technology and Research was ranked 133rd. Worldwide, China's Chinese Academy of Sciences was ranked as the top institution. The Nature Index takes into account articles chosen from 68 nature science journals.

NTU president Bertil Andersson has an explanation for all these placings, "By continuing to attract the best professors and students from Singapore and around the world, I expect NTU will break into Times Higher's top 50 universities in a few year's time." Times Higher Education World University Rankings is yet another index, which places NUS 25th and NTU 61st.

Unfortunately the Singaporean post-graduate scholar who was impregnated by Associate Professor Yu Wanli of the prestigious Peking University is a sad reminder that not all in possession of paper qualifications have their heads screwed on right. Apparently she was fully aware Prof Yu was into bondage, swingers' parties and one-night stands. Our very own sex-for-grades law professor from the NUS pales by comparison. No wonder the ministers have been dissing the importance of chasing a university degree. Especially when university dons - who supposedly have to publish or perish - still have time to chase skirts.