Awareness Does Not Reasonate 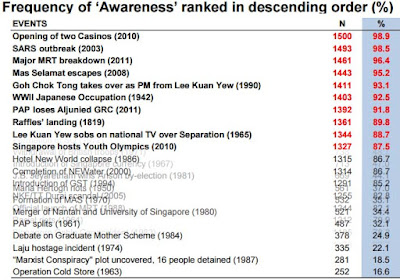 The Institute of Policy Studies (IPS) recently concluded a survey of more than 1,500 Singaporeans carried out between August and October 2014 to explore which are the influential Singapore stories and why, and who, do these stories resonate with. One of the summary findings claims that "Awareness of events does not equate to importance to respondents e.g. opening of two casinos."

Recall that the fractious decision of turning Singapore into Sin City - complete with two architectural monoliths symbolising Sodom and Gemmorah - was a divisive one that even pitted members of parliament against each other. How did that end up being of lesser importance to them and to future generations of Singaporeans? Adding insult to history, two epochal events are barely registered or rendered significant - the so-called "Marxist conspiracy" and Operation Cold Store.

Third on the awareness tableau was the major rail service breakdown in 2011, a minor hiccup compared to the recent North-South and East-West train disruption. That 2011 debacle brought down the high flying Saw Phaik Hwa who profited from sales of retail space at the cost of train and track maintenance. Since awareness does not translate to importance, so we are told, the equally clueless lieutenant general now put in charge is in no danger of receiving a pink slip. Despite the simultaneous breakdown of two lines inconveniencing 250,000 commuters. Inured to multifarious failings in the system governance and infrastructure, the people no longer seem to care.

Research analysts Varian Lim and Elaine Ho at the IPS Social Lab are saying that, beyond being a means of transportation, the MRT system represents Singapore’s journey from Third World to First. That being the case, the country must be grinding down to a halt.