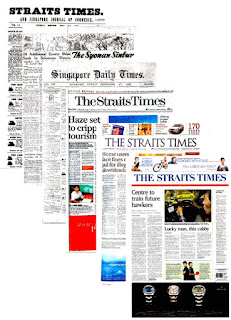 Their own annual reports confirmed the decline — from 390,363 printed copies of Straits Times (ST) circulated daily at the turn of the millennium to 365,800 in 2010. In 2012, circulation for printed versions of ST shrunk further to 355,700. The Audit Bureau of Circulations (ABC) statistics has it that average net circulation dropped to 322,056 in 2013. So what makes editor Warren Fernandez think a cosmetic revamp ("New look, new ideas, same Singapore soul") will reverse the inevitable ?

Traditional media is going the way of the dodo. Digital versions may recoup some of the lost sales, but the message is still more important than the platform. No point reinventing the wheel when same crap is being peddled.

It's worse when writers like Rachel Chang display open bias in flagellating the opposition political parties. She may be targetting the wrong group when she lashed out with words like "cronyisms and opportunism are not illegal". Look who has a wife, an uncle and relatives ensconced in privileged and financially lucrative appointments. She opined that it would be foolhardy for the electorate to vote in another opposition group to run a town council, whilst indirectly providing justification for them to do so. People in glass houses really shouldn't throw stones.

When Zakaria reminded the prime minister of Singapore's dismal standing in freedom houses rankings, Lee dismissed the shameful status quo with "They don’t like us, fair enough, doesn’t mean we are in the wrong". It looks like Chang is not the only one in need of another wise saying, this time from Jonathan Swift in his ‘Polite Conversation’ and first attested in the United States in the 1713 "Works of Thomas Chalkley":


‘There are none so blind as those who will not see. The most deluded people are those who choose to ignore what they already know.’