Nothing Happens By Chance 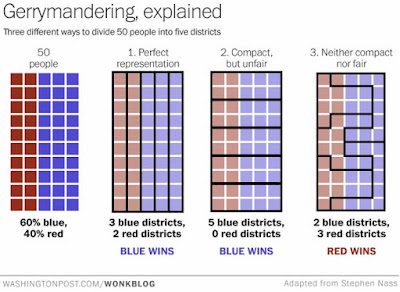 Tharman told the CNN host that the anomaly of 80 out of 87 seats going to one political party was an outcome, not by design. The guy who equates a safety net with a trampoline - an exercise equipment which paralyzed pole-vaulting champion Brian Sternberg from the neck down after a bad landing - will probably also tell you gerrymandering is a natural event.

The graphic from The Washington Post is easily the best explanation of gerrymandering you will ever come across. In addition to its use to accomplish desired electoral results for a particular party, gerrymandering may be used to help or hinder a particular demographic, such as a political, ethnic, racial, linguistic, religious, or class group. One useful class group would be new citizens fresh off the boat, although Yang Ying may not be counted on to cast the right vote. Then again, he was neither cuffed nor shackled, or sent to the Institute of Mental Health for a check up. He should be so grateful, this Integration and Naturalisation Champion (INC) lauded in MP Intan Azura’s ward of Jalan Kayu.

Not leaving anything to chance, it was revealed in parliament yesterday that the Electoral Boundaries Review Committee (EBRC) was formed surreptitiously two months ago. Thanks to NCMP Yee Jenn Jong's questioning, we also know that the Committee comprises entirely of civil servants - "it is unlikely to have different political parties working on the boundary recommendations". Nothing is left to chance. The thirty pieces of silver which was the price for Judas Iscariot's extracurricular activity is now worth $500. The poor sap should have had the precious metals independently assessed.