The Truth About The Leak

Desperate for an answer, SMRT's Desmond Kuek was obviously clutching at straws when he blamed a heavy downpour the night before July 7 for tripping the sophisticated train system. So obvious that he covered his own lie with a "could have, but then it is not something conclusive". Don't know, say don't know, lah!

The army general jetted in expensive experts from Sweden's Parsons Brinkerhoff and Japan's Meidensha Corporation - bill footed by Lui Tuck Yew's LTA - to check on the train power circuitry only to find that water ingress between the Tanjong Pagar and Raffles Place stations had short circuited the electrical system. Of course the explanation is mired in gobbledygook:


"However, the weak resistance of an insulator can allow electricity to flow through the insulator to the ground, resulting in a higher than normal voltage difference between the running rail and the ground." 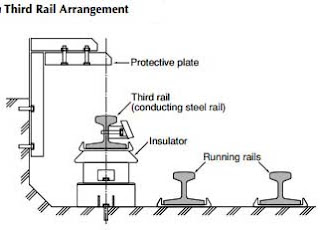 Engineers identify and resolve potential problems by use of diagrams. The one on the left illustrates the third-rail conductor system of the Ginza line of the Tokyo Rapid Transit Authority (TRTA). Their voltage is 600 or 700 V. The insulators - usually made of fast-drying non-conducting material such as glass, porcelain, or composite materials - support the current-carrying third rail at every 2.5 to 5 m. How such passive components can be easily "contaminated" as SMRT claims staggers the mind. Since we don't know, we can't quiz the engineering challenged CEO why all the 30,662 insulators of the North-South East-West lines have to be changed out, and ultimately charged to the long suffering commuters via fare hikes. Maybe they are all fakes sourced from a dubious vendor in China.

What we can ask is why a patrol officer had spotted the leak (Kuek uses "viewed" and "observed" to blur the distinction further) and could classified it as "non-urgent". Was the operator waiting for the ponding to rise to knee high level? Worse, the same leak spot had been "repaired" 2 to 3 times over the past 8 months. If their engineers can use cable ties to secure the claw for the third rail, why didn't they use chewing gum to plug the leak? Oops, almost forgot, gum is still banned.
Kuek's lame "gimme another chance" excuse is pathetic:
"So in this particular case and with all instances, as we categorise, we make it an effort to try and repair all leaks even though we might have longer time frame to repair those leaks, we try to repair them as quickly as possible."

Notice how Kuek and his army buddies always obfuscate the issues with pseudo-technical jargon. Occam's razor (or Ockham's razor) says that the more wild assumptions you tend to make, the more unlikely the explanation is. Credibility at our public transportation system is in dire need of a serious reboot.