A Deficit Of Logic 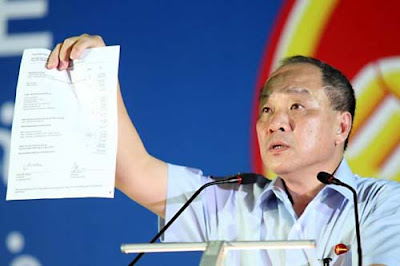 Lee Hsien Loong's team may like to borrow words like Responsibility, Accountability and Transparency, but in their perverse version of the English dictionary, they spell only R.A.T. If you thought the rodents burrowing at Bukit Batok were bad, the species unearthed from parliament house are downright despicable.

It was Charles Chong who told Chinese daily Lianhe Zaobao that the Punggol East SMC had a surplus of $1 million when the People's Action Party (PAP) handed it over to the Workers' Party (WP). Chong was "misleading, lying to the public." These were same words Lawrence Wong used to slime Chee Soon Juan at a recent forum, and claimed an apology should have been forthcoming.

PAP Pasir Ris-Punggol candidate Zainal Sapari inadvertently confirmed the big lie when he wrote in his 9 Sep Facebook posting, Punggol East’s town council accounts showed that “At the handover to AHPETC on 30 Apr 2013, although there was a deficit in the accumulated routine fund of $282,009...” As students of accounting 101 are familiar, the amount of $303,372 claimable as reimbursement from some fund is merely an account receivable, not cash in hand. There's no guarantee that accounts receivable will not turn into bad debts, especially when the Town Councils Act has opaque rules about what happens when there is a change in party managing a constituency. By same definition, your minimum sum in your CPF account is also "claimable", but we know how that goes.

When chief Low Thia Khiang  held up a printout of the ward’s town council accounts as at April 30, 2013, showing a deficit of more than $280,000, he had the proverbial smoking gun in hand.

In 1997, J.B. Jeyaratnam waved a copy of a police report, complaining that Goh Chok Tong, Tony Tan and Brigadier-General (NS) Lee Hsien Loong had been inside a Cheng San GRC polling station on Polling Day. Then  Law Minister S. Jayakumar put it to Attorney General Chan Sek Keong for a legal opinion, and resulted in the warped logic, "while it is illegal to be within 200 metres of a polling station unless you are voting, IT IS NOT ILLEGAL IF YOU ARE INSIDE." Jeyaratnam was also sued for waving another police report, in support of another candidate in Cheng San, lawyer Tang Liang Hong (who Prime Minister Goh Chok Tong had accused of being a Chinese chauvinist). Goh considered the $20,000 award for damages as "derisory", and on appeal, the damages were raised to $100,000 plus $20,000 in court costs.

Times may have changed, but the rats still proliferate. Let's see how this saga unfolds.