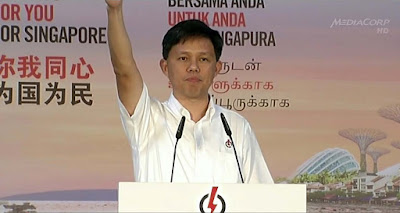 Teo Soh Lung once wrote that her mother would walk away from the television set whenever the ghastly image of the horrible person appeared onscreen. If you had gone into the kitchen for a drink of water when his successor took to the mike, you would have wondered who was raising a ruckus when the next speaker came on. Maybe someone had changed channels, and it was Hitler ranting away in the famous scene from "Der Untergang" (English title:"Downfall").

It was no less than the "keechiu" general, punching his clenched fist into the air, in an uncanny resemblance of the Bavarian corporal rousing his faithful with "Seig Heil! Seig Heil!" (English: "Hail victory! Hail victory!"). Screeching away for all his high octave's worth at the massive turnout - we have to resort to imagination here, state television cameras seldom pan to a shot of the actual size of the gathering - he lambasts the "quality" and "inexperience" of the opposition party candidates.

It would have been useful if Chan had addressed, and perhaps taken pot shots at, some of the innovative proposals from the alternate voices. The Workers' Party's idea of a 10-year "through train" to do away with the Primary School Leaving Examination (PSLE) is surely worth a few rounds of robust debate. But no, their preferred weapons of destruction seem to be the usual fifty shades of character assassination. The horrible person would have approved.