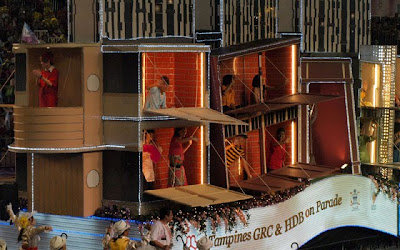 On 4 February 1973, the first Chingay parade was held in Singapore to make up for the dampening effect of  banning firing of Chinese New Year firecrackers, considered a fire hazard. This ban was viewed unfavourably despite the safety issues cited.
The People's Association and the Singapore National Pugilistic Association organised street parades featuring signature floats, acrobatic acts, lion and dragon dances, stilt walkers, etc, to bring back some cheer to the general public.
It is doubtful this particular float in this year's Chingay Parade 2010 lifted spirits. On the contrary it reminded everybody of the housing squeeze and unaffordable prices brought on by National Development Minister Mah Bow Tan's policies, in particular the unbearable crowding due to his ill conceived notion that the island can support 6 million peoples, 30% of which are foreign immigrants. Lee Kuan Yew has said that he deserves to lose his seat, and the GRC of Tampines, in this coming general election, if he failed to cough up a good explanation.

But who paid for this float? Mah is already remembered for wasting $400,000 on Interbrand to rename Marina Bay (as Marina Bay). Talk about throwing good money after bad.

Worried about the grumblings on the ground, the ruling PAP is once again redrawing the electoral boundaries to absorb discontenting constitutuencies into the fold of their money bought supporters. What's another few thousands to prop up their weakest link?
Posted by Tattler at 9:09 AM