According to revelations in parliament on Monday November 22, three Singaporean Malays admitted to providing sanctuary to fugitive Mas Selamat, after being "confronted with the facts" last month in October 2010. Brother Asmom, sis-in-law Aisah and niece Nur Aini easily fooled Wong Kan Seng's highly decorated (and highly rewarded) Home Team by deliberately and successfully withholding key information when they were first interviewed by the authorities on March 3, 2008.

New Home Affairs Minister K. Shanmugam upstaged his predecessor by revealing to Parliament that Mas Selamat had stayed overnight in his brother’s Tampines flat on Feb 29, 2008, before absconding to Malaysia with a getaway backpack containing an EZ-link card, S$100 and RM100 in cash, hair-net which he wore as part of his disguise, tudung, map and some paracetamol. The abetting trio, Nur Aini (18 months' jail), Asmom (12 months) and Aisah (3 months) were arrested and charged last week on November 10. 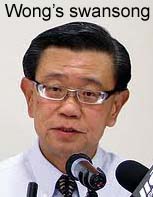 Speaking at a community event on 25 September 2010, soon after the Malaysians handed over the fugitive, then still Minister for Home Affairs Wong Kan Seng had declared, “I am sure that Singaporeans are very interested to know how he escaped. I can assure Singaporeans that when the information he gives can be verified... I will let Singaporeans know more about how he escaped.” And as late as 18 October 2010, in his Oral Answer to MP Christopher De Souza, Wong merely recanted the embarassing toilet break episode without shading new light on how the terrorist managed to leave Singapore and made his way to Malaysia.

So how is it Shanmugam had access to the wealth of details in the month of October and not Wong? Wong officially relinquished his post on 27 October.Was the Home Team playing favourites, denying Wong his last hurrah, or were they biding their time to hand over the goodies to their new paymaster (and just in time for the Xmas bonus)? Minister-in-Charge of Muslim Affairs, Dr Yaacob Ibrahim lamented that Mas Selamat was aided by family members, “I am disappointed because we know that Singaporeans from all backgrounds have come together since 2002 – the Malay/Muslim community very prominently – to keep the lid on the danger of terrorism.” As they say, blood is thicker than water, but sometimes political intrigue transcends over all.
Posted by Tattler at 10:04 AM