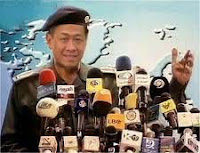 Mohammed Saeed al-Sahhaf (Arabic: محمد سعيد الصحاف‎ ) came to world wide prominence for his grandiose and grossly unrealistic propaganda broadcasts made prior to and during the 2003 invasion of Iraq, extolling the invincibility of the Iraqi Army and the permanence of Saddam's rule. His announcements, intended for an Iraqi domestic audience subject to Saddam's cult of personality and total state censorship, were met with widespread derision and amusement. Quite obviously, Minister Ng Eng Hen is trying hard to outdo Al-Sahhaf, a.k.a. Baghdad Bob.

Ng's debut was his vociferous rebuttal of a university finding that foreigners took 75% of new jobs created. Nanyang Technological University economists, Chen Kang and Tan Khee Giap had based their study on publicly available figures from the Manpower Ministry's website. Ng accused them of being "sensationalist, irresponsible and unprofessional", but avoided labelling same of another university don involved in the study, Lim Chong Yah, since latter's daughter is married into the Lee family. According to Ng, 9 in 10 new jobs in Singapore actually went to citizens and permanent residents. In hindsight, we now know how malleable truth can be under the hands of a spin doctor.

He's at it again, this time insisting that polls conducted in 2008 and this year showed 95% of young people are proud to be Singaporean. The Education Ministry had polled 74,000 students in Primary 4 and 6, Secondary 2 and 4 and Year 2 JCs. Ng also claims that "objective surveys to gauge the sentiments from the ground" had consistently shown that the public felt Singapore was a place they belonged to, and would defend (it) if it came under threat.

That was too much even for the normally compliant press, who quoted heavily from a letter from the public:
"I suspect that, not only young Singaporeans, but Singaporeans in general are beginning to feel that way.
My sentiment comes from engaging with friends, colleagues, and National Service buddies on many national issues, in particular the foreign talent policy.
If a crisis or war hits Singapore, it would be very disheartening to see hundreds of thousands of foreigners and PRs ditching Singapore leaving behind 3 million-odd Singaporeans to fend fro themselves."

If the good doctor still happens to be high on spirits, alcoholic medication or otherwise, he should listen carefully to the writer's poignant ending:
"Surely the situation would dampen the Singapore spirit. In the end, Singaporeans would ask: What are we fighting for?
I hope my children will never have to ask me this question."
Posted by Tattler at 8:07 AM