None Are So Blind As Those Who Do Not See 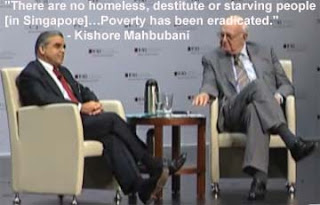 "I wander around the city and wonder where the poor people are," observed Paul Vocker, former chairman of the US Federal Reserve and economic adviser to President Obama, when he was in Singapore to speak at the NUS Lee Kuan Yew School of Public Policy.

In Tokyo, the down and out surface in subway stations after the last commuter has departed, and volunteer workers distribute food packets discretely at the doorstep of their cardboard shelters for the night. Come dawn, just before the morning stampede of the office crowd, they neatly pack away their worldly belongings and vanish for the day.

In Singapore the vagrants are swept up by welfare officers driving around Singapore's housing estates, beaches and streets. According to a report in January 2010, there were about 280 patrols last year, up from 160 in 2007. Those picked up from void decks and beaches last year included 17 families, up from just 4 in 2007. Of the total of 253 people nabbed by officers from the Ministry of Community Development, Youth and Sports (MCYS) last year, up from 123 in 2007, 85 per cent were Singaporeans.

Most are dumped at government-run homes for destitutes such as Pelangi Village in Buangkok Green where they get free food, clothes and shelter, but face curbs on their freedom. Think Changi Prison without the criminal tag. About 260 other people, including 43 families, end up in two temporary shelters for the homeless run by New Hope Community Services, a voluntary welfare organisation (VWO). A third shelter, operated by Lakeside Family Service Centre, was set up early this year and is currently housing 12 families.

Some shelter residents were forced to sell their homes because of hard times, they lost their jobs and could not keep up with mortgage payments. About 60 flats are voluntarily surrendered to the HDB every month. "The number of HDB-related cases I see rose significantly after flat prices started to rise," said MP Charles Chong. They have Mah to thank for that.

The shelters house the homeless for only 3 months. After release, about 40 per cent go to live with friends or relatives and about 30 per cent rent a flat from the HDB. The rest probably go back to the streets, to be picked up again, and continue the circle of life for the poor and desperate in Singapore. How could Volcker have missed out on all the action in town? Next time, he should ask MP Lily Neo to show him how the residents in her Jalan Besar ward put up with less than 2 full meals a day.
Posted by Tattler at 2:03 PM