The Bomb At Our Doorstep

When Malaysia's Energy, Green Technology and Water Minister Peter Chin pronounced plans to get its first nuclear power plant up and running by 2021, there was no public uproar, unlike the local reaction to the building of the two casinos. Malaysia has been operating its 1MW TRIGA® Mark II research reactor since 1982 and signed an international nuclear safeguards agreement in 1972. 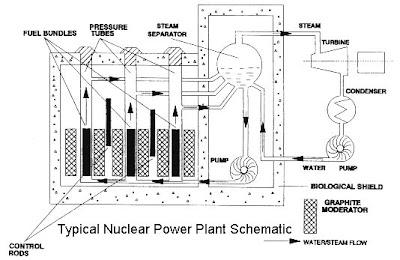 A nuclear power plant consists of four fundamental elements: the reactor, the coolant system, the electrical power generating unit, and the safety system.

The source of energy in a nuclear reactor is the fission reaction in which neutrons collide with nuclei of uranium-235 or plutonium-239, causing them to split apart, producing huge amounts of energy.

Energy produced in the reactor is used to boil coolant (water, liquid sodium, or carbon dioxide gas) and heat water in a secondary system, to produce steam to rotate the blades of a turbine. The turbine powers a generator that produces the desired electrical energy.

The safety system in a nuclear power plant addresses a most serious potential problem: the loss of coolant in the system. If such an incident were to occur, the reactor core could melt down, spewing radioactive materials to the rest of the plant and the outside environment.

When generating unit No.4 of the Chernobyl Nuclear Power Plant in Ukraine blew up in 1986, radioactive clouds released were detected as far away as in Western Europe. Acute radiation syndrome (ARS) was diagnosed in 134 people on-site, of which 28 people died. 10 years after the industrial accident, remains of the Chernobyl reactor were too radioactive for anyone to spend more than a few minutes in the area. Experts claim that nuclear power plant can never explode like a nuclear bomb.

Still, boys will be boys, and scientists playing with spent uranium rods might be tempted to moonlight for bad guys. Fortunately, according to the Newsweek Dec 20 article ("Killing The Killers" by Roen Bergman), Israel's Mossad are pretty good at terminating these shady characters, as in terminate with extreme prejudice.
Posted by Tattler at 7:53 AM