What Exactly Did Not Take Place?

Mr Danny Soo Ee Hock, member of the ruling PAP party and its youth wing Young PAP, was a prominent grassroots leader of the Punggol Park Community Club Management Committee, and a recipient of the Public Service Medal (PBM) on National Day 2010. He's no. 92 on page 5 of the honours list.

He also happpened to take about 200 upskirt videos of unsuspecting women with a USB pen camera pen while riding the escalators of shopping malls. District Judge Lee Poh Choo said Soo knew full well what he was doing and deemed him a serial offender. Too bad he was a highly regarded member of the People's Association, and hailed as an example of the new blood renewing grassroots ranks.

Or maybe he was. His glorious write-up was expunged from the website, but a sneak peek at the html source code reveals the redacted material: 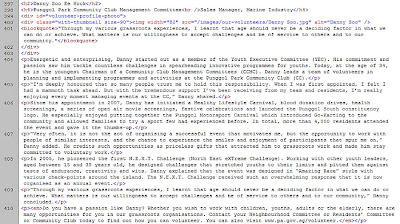 Part of the official statement issued by George Yeo's Ministry of Foreign Affairs on the leaked cables reads, "On the specific complaints raised by the Malaysians, what Singapore officials were alleged by WikiLeaks to have said did not tally with our own records. One purported meeting did not even take place." Let's just say we have seen enough of their integrity in record keeping to place more faith in Julian Assange's archival methodologies.
Posted by Tattler at 8:19 AM