Looking After The Bottom Feeders

Singapore cabinet ministers' salaries are pegged to the 48 top earners in the private sector in 6 professions. The scheme is to rank these high rollers according to their paycheck, take the median payand lob off one-third. This way, a minister's salary is "kept competitive" against the private sector, even though the fat cats are safely esconced in the cushy public sector. Defence Minister Teo Chee Hean, who is also Minister-in-charge of the civil service, claimed that while "there is no perfect method for doing this benchmarking", the current method had been debated thoroughly in 1994 and had the support of the (PAP dominated) House.

In the Great Government Salary Debate of 2007, Workers' Party's Mr Low Thia Khiang countered with: "We suggest that the benchmark should take into account international practice, in particular countries such as Switzerland, Denmark and Finland." Low noted that these countries have a pay adjustment scheme, but "unlike Singapore, they all do not have a sure-win formula that ensures civil servants always have the best deal by benchmarking specifically to the top few earners".

"There's simply no point in offering high remuneration just to entice someone to serve if what he is interested in is to make more and more money for himself and his family in pursuit of material interests. Don't forget that even if you don't pay peanuts but pay with a bigger piece, say, a banana, you can still get a monkey," he said. And, thanks to WikiLeaks, we have just seen/heard a lot of them at the MFA.

One year earlier in 2006, while speaking to a election rally in Lee Hsien Loong's home turf of Ang Mo Kio, Low told a rapturous audience that he would rather see the ministers' salaries be pegged what the poorest 20% of Singaporeans earned. Ministers' pay could be multiplied by a factor of 100, and they could still get $80,000 a month. "This will give the ministers an incentive to bring up the income of the lowest 20% of Singaporeans," he said to loud cheers from the epic crowd. To understand why his enthusiatically welcomed proposal fell on deaf ears, look at this recent chart: 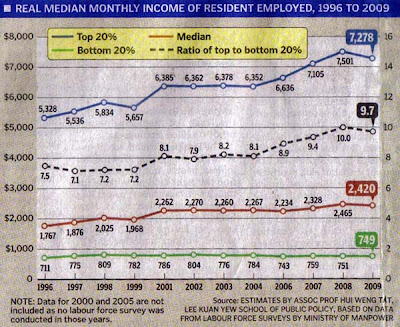