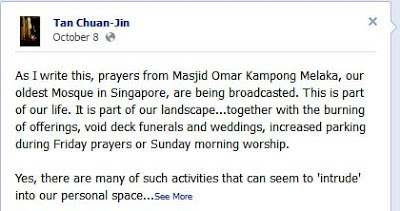 One week ago an ex-army officer from the general staff was first to snipe at an ex-assistant director of the NTUC staff for her erroneous accounting of nuptial arrangements at a void deck. The curious part to his Facebook post alludes to noise pollution broadcasted by a minority ethnic group. This can't be true, since their religious practices have always taken into account consideration for others in the community within hearing range. One scholarly website on the relevant subject, "Islam Q and A" , expresses this well:

Answer:
Praise be to Allaah.
Outdoor loudspeakers should not be used for the prayer, whether that is for taraaweeh, tahajjud or any other prayers such as Fajr, Maghrib and ‘Isha’, because that leads to many negative consequences and causes disturbance to the neighbours of the mosque.

He replied:
What you have mentioned about using loudspeakers on the minaret for the prayers in which Qur’aan is recited out loud is something that is not allowed, because it causes a lot of disturbance for the people in houses and other mosques nearby. Imam Maalik (may Allaah have mercy on him) narrated in al-Muwatta’ (178), from Sharh al-Zarqaani in Baab al-‘Aml fi’l-Qiraa’ah (How Qur’aan is to be recited) from al-Bayaadi Farwah ibn ‘Amr – may Allaah be pleased with him – that the Messenger of Allaah (peace and blessings of Allaah be upon him) went out to the people when they were praying, and their voices were loud in recitation, and he said: “ A worshipper is conversing with his Lord, so let him think about the One with Whom he is conversing. Do not raise your voices above one another when reciting Qur’aan.”


Maybe the brigadier general happened to have had a bad hair day at the keyboard. But something else must be amiss when Lee Bee Wah (member of parliament, Nee Soon GRC) made her own personal rant on her Facebook pages, “Can we use the strength and power of the 60% good Singaporeans and residents who do not litter to put pressure and change the bad habit of the other 40% litterbugs?”

That's not unlike Mitt Romney castigating the 47% who won't vote for him, ever. Even if Lee's 60/40 divide is not politically motivated as widely speculated online, do we need another excuse to test the delicate fabric of our multi-racial, multi-cultural milieu by introducing a new social division? This coming on top of the confabulation on xenophobia, brought about by a flawed immigration policy which challenges our limited living space and ill prepared infrastructure.

The last time Lee had to apologise in public (“I sincerely apologise for causing any grievances, any stress.”) was for having blown up in Beijing, ranting that table tennis team manager Antony Lee was responsible for a game loss and should be fired. Do you think she will ever make amends for branding Singapore as being made up of 40% litterbugs? Dream on.