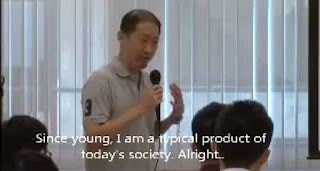 The doctor who owned "just a Ferrari spider convertible 430", dined at fine restaurants with Michelin Chefs and kept company with the likes of Miss Universe and Eduardo Saverin (net worth $2.6 billion) said society made him do it.

An understanding of the priorities of individuals in respect of the social systems into which they are immersed  helps to explain social problems (attributed to foreign intake or competition), social norms and values (unresolved "visceral" racial issues), moral and political change (exacerbated by institutional promotion of gambling), organizational practices (meritocracy eroded by cronyism), and interpersonal and cross-cultural conflict (conflated to xenophobia).

George Herbert Mead (Self and Society, The University of Chicago Press, Chicago, 1962) argued that the self consists of more than just a bare organisation of social attitudes, but can be divided into an "I", an unique and natural response to the attitudes of others, and "me", who knows what is socially required in a certain situation through the recognition of the attitudes of others. The point in Mead’s theory becomes evident when one ponders whether social order derives from individuals or whether individuals derive from social order.

Adding his two cents to the PSLE debate, DPM Tharman said "It's only possible to succeed in character education and encouraging students to question and think originally if we create real space for it in the educational system." Will the students be encouraged to be an "I" or a "me"? When they took History and Geography off the syllabus, they conveniently did away with the horror stories of Hitler, Stalin and Pol Pot,  and the perspective of what a small island we really are on the planet earth. Leaving only Math to calculate the millions to be earned from a lucrative career choice, and enough Science recognize our physical mortality. Instead of creating space, the shrinkage probably did, and continue to do so, cause misery for the future generation. Quite obviously, the one who coined "teach less, learn more" wasn't too concerned with morality plays.