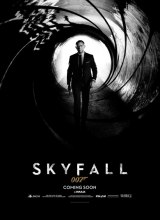 "M" dies at the end of the movie. There I said it.  The organizers at the premier viewing of "Skyfall" last night passed out a leaflet giving specific instructions not to blog about it, but no true 007 fan could resist a challenge like that.

But it was a good way for James Bond's spymaster boss to go. Besides, the new M (Ralph Fiennes as Mallory) had already told her about the forced retirement plan, all because she lost a hard drive. In real life, Judi Dench is getting on with years. Born in 1934, it was reported her failing eyesight required her to memorise the lines as she could no longer read the script. At least she gets to go off with a bang (another spoiler - she was shot). That way we get to remember her at her best, who not too long ago was by a margin voted "the greatest actor of all time" in an exhaustive poll of the readers of The Stage magazine.

The other interesting segment involves a new Q, the official quarter master who issues Bond his weapons of mass destruction, a youthful geek who pooh-poohs the veteran of spy trade with a disarming "Age is no guarantee of efficiency". Daniel Craig is not that old, age 44, and he is signed up for another two installments of the James Bond franchise.

Still, old timers must always learn to give way to the energies of the younger generation. After all, what has an octogenarian got to teach today's youth, save hackneyed war stories about frightening communists. The same communists the world is embracing with open arms because of their new found economic clout. When asked what she thought about the Tienanmen incident, the PRC exchange scholar at our local university said she wasn't even born when it happened. It is so convenient to forget the atrocities of the past, except when a living relic is still walking around to remind one of the abuses in a bygone era.
Posted by Tattler at 10:45 AM