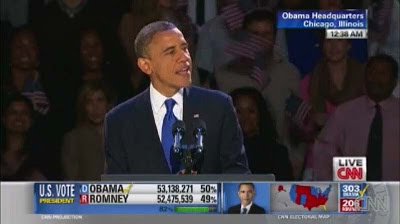 Obama's re-election for a second term is sweet.

Recall that at a local conference in early February 2008, it was Minister Mentor Lee Kuan Yew, no less, who labelled Obama as a “flash in the pan”. He continued to exhibit public disdain and lack of enthusiasm for the Democratic candidate, right until the moment when the financial crisis hit corporate America in September 2008. The daughter-in-law had invested heavily in Bank Of America shares.

In stark contrast, Lee spoke effusively about John McCain in laudatory terms, lavishing public praise on the senator’s record and experience in government, all but endorsing him as Singapore’s choice for President of the United States. Even the Straits Times got in on the act, hosting a joint commentary authored by John  McCain and fellow senator Joe Lieberman on the subject  of the US’ commitment to Asia on the opening day of the 2008 Shangri-La dialogue, an annual gathering of defence ministers held in Singapore.

Today, even as the score card showed the electoral votes for the Democrats clear the 270 halfway mark, the ChannelNewsAsia team was still rooting for Obama's opponent. And, while Obama was delivering his powerful thank you speech, the CNA newsfeed scrolled that the US dollar tumbled against the Euro at the news of the historic re-election.

All probably because one man claimed, and probably still claims to his dying day, Singapore is not ready for an Indian prime minister.

You bet Obama scares him. Especially when the man said what makes USA great is that the country welcomes dissenting views and voices. This is a guy who says it doesn't matter who you are, where you come from, or what you look like, or where you loved. It doesn't matter if you are black or white, or hispanic or asian, or native american, or young or old, rich or poor, able or disabled, gay or straight..... we are greater than the sum of our individual ambitions. But of course, Obama doesn't have to contend with a Group Representation Constituency (GRC) system that was implemented because of one man's belief that votes are cast along racial lines.