All Aboard The SMRT Gravy Train

According to Bloomberg, SMRT Corporation Ltd has seen their bottom line shrink from $161.1M to $119.9M despite an increase in revenues from $969.7M to $1.1B in 2012. An increase in the percentage of sales devoted to cost of goods sold from 53.00% to 55.93% was reported to be a key component of the falling profits in spite of the rise in ridership and revenues. The familiar looking "Other Operating Expenses" book keeping entry (shades of YOG accounting) also jumped from $161.1M to $188.0M. Is this where they post the compensation for the board of directors? 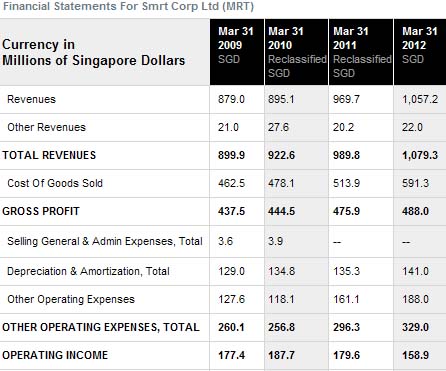 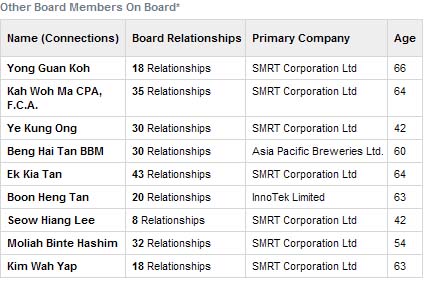 Going by the example of Ong Ye Kung, the Executive Secretary of the National Transport Workers Union (NTWU), the largest transport union in Singapore, who wears another hat as a member of the Board of Directors of SMRT, collecting directorships can be quite lucrative. Based on SMRT’s 2011-2012 Annual Report, Ong's annual director fee was $80,000. Now imagine multiplying that by 26.

A study of 3,816 directors by National University of Singapore's Corporate Governance and Financial Reporting Centre (CGFRC) in 2008 found that some 84 per cent of directors in Singapore-listed companies hold just 1 seat. Some 14.5 per cent of directors hold between 2 and 5 positions in listed companies. This leaves less than 2 per cent of directors - 51 individuals in all - who sit on least 6 company boards. Most of the "popular candidates" have either government links or have accounting backgrounds. For example, among the 16 directors who have 8 or more posts, 10 are former or current members of Parliament (MPs), or former civil servants. Ex-PAP MP Wang Kai Yuen used to top the list with 12 directorships, but still he wasn't a happy man, grumbling to all who cared to hear, "some of the companies pay me as little as $10,000". Move over, Wong, your record has been broken several times over.

Professor Mak Yuen Teen, co-director of CGFRC, said that having "super busy" directors is a concern, "With due respect, I do wonder if they are there because of the good reputation of our government and civil service, and companies wanting to capitalise on this, than because of their perceived independence, personal competencies or commitment."

Meanwhile former chief of defence CEO Desmond Kuek, fresh from holidaying in the United States while turmoil reigned at the bus depot, told the press that SMRT has "deep-seated issues". Makes you wonder how many of those are seated on the board.