Wait For The Numbers 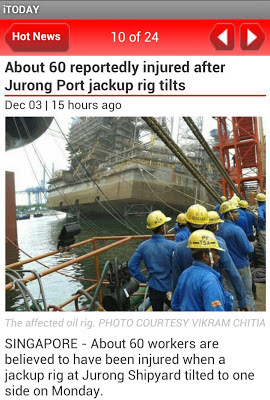 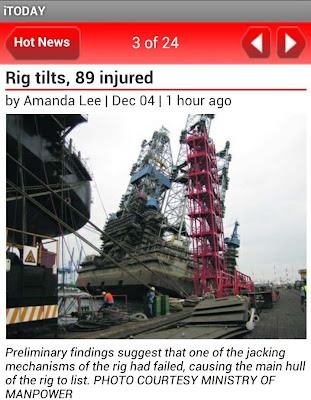 It was the fog of war that clouded the initial reports of what happened at Benghazi, an act of terror that turned out to be a terrorist attack. That happens when an incident takes place in a foreign country thousands of miles away. But why can't the local media get their details right when something occurs within our own doorsteps?

The number of Chinese nationals involved in the SMRT strike went from 200 to 171, and at last count could actually be 184 (4 charged, 1 sentenced, 29 deported, 150 given a "severe warning"). It was not just semantics at play in the first strike in 26 years (according to the manpower ministry the last strike in Singapore was staged in 1986 by shipyard workers, ignoring the bus strike of 1955), the reporting seems to be malleable to political direction.

The number of casualties at Jurong Shipyard, subsidiary of offshore engineering group Sembcorp Marine, where the jack up legs of a platform were being tested while other workers were still onboard, is currently listed as 89. The ministry says the injured workers were taken to hospitals and 80 were later discharged, with 3 remaining in an emergency ward. They are probably trying to come up with an appropriate adjective for the state of well-being of the balance of 6 humans at risk.

The numbers matter. Expensive overheads like Tan Chuan-Jin depended on data from TODAY and Lianhe Zaobao to account to parliament for the percentages of local workers employed by the two Integrated Resorts (IRs). That's the euphemism used for the gambling joints at Resorts World Sentosa (RWS) and Marina Bay Sands (MBS). Tan is obviously not prepared to be caught by the number of jobs promised (36,000? 24,000?) that was used to justify the construction of the dens of iniquity. Then chairman of the People's Action Party (PAP), Lim Boon Heng, cried on  national tv while explaining that he agreed on the casino issue only because it had brought jobs to Singapore,  "It is a difficult one for me, because I do not like the idea of using gambling as an industry for Singapore and using that as a means of earning an income."

There is good reason be prudent with the reporting of the major industrial accident at Jurong.  The spot light has just been shone on the welfare of the foreign workers, the (lack of) safety precautions at the shipyards will have to be carefully aired. Brigadier General and Acting Minister of Manpower Tan will probably reprise his line for the SMRT debacle, "The labelling of industrial action such as this is not trivial.. it would then open up  a series of actions that would follow thereafter." The souls at Bukit Brown must be rolling over in their graves.
Posted by Tattler at 10:13 AM