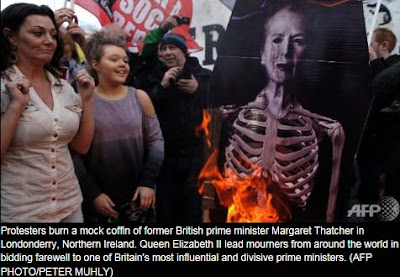 More horrifying than the ghastly pictures of the victims of the Boston pressure cooker bomb blast, must be this AP photo of a crowd celebrating a politician's passing.

On 3 May 1989 Margaret Thatcher had already chalked up ten years as Prime Minister. Sixteen months earlier, on 3 January 1988, she had already become the longest-serving Prime Minister of the twentieth century. (John Campbell, "The Iron Lady")

Several of her senior colleagues, even as they applauded her achievement, felt she should have chosen the moment to announce she would step down soon, when she could still have gone out in triumph. Even her husband, Denis, briefly thought he had convinced her not to stand for another election. He did not force the issue, but he had seen enough of politics to suspect  that she would be hurt in the end if she stayed too long.

Thatcher was commenting on the fall of the Berlin Wall when she uttered the following words, but they could have easily been applied to human barriers too:


"The day comes when the anger and frustrations of the people is so great that force cannot contain it. Then the edifice cracks: the mortar crumbles...  One day, liberty will dawn on the other side of the wall."