Call it another mee siam mai hum moment. The prime minister gave a big speech about safety at work, and identified the construction, manufacturing and marine sectors as places where most incidents occur. What he missed out was the Jurong East IT workplace where a 29 year old undergraduate was pummeled mercilessly like a human punching bag. Apparently the Manpower Ministry was alerted, but they proved as meek as the recipient of the heavy blows to the head. All MOM did was to remind employers to treat employees "fairly and with respect" and, as for the "unfairly treated", "they should report it to the police immediately." The Acting Manpower Minister's own pretty speech about discriminatory hiring practices was just as lame, premised on his stance that laws were not "a silver bullet that will solve all problems."

We are glad the parents did not take the law into their own hands when they confronted the violent cretin who abused their son. For all we know, one  wrong move, and they could end up as subjects of a police investigation. We are glad that they did convince their mild mannered son - who had earlier denied he was the subject in the video because he did not want to blow up the matter - that might is not right, bullies need to be put in their place. Imagine the horror if the intern had been a female, who could have ended up like the Singapore core, violated multiple times by having foreign elements inserted, until a Good Samaritan like Shane M had the moral courage and guts to intervene.

Meanwhile, at the Shane Todd inquiry, some body's boast that the Singapore police is at least as competent, if not more competent, than the FBI, is starting to blow up in his own face. Ashraf Massoud, computer analyst engaged by Todd's parents, had to teach the cops a thing or two about handling evidence. The Post-it note on Shane's laptop, "Please do not enter. Please call the police" , means just that. Leave it to the professionals. 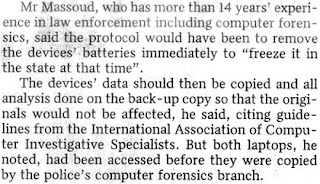 The sorry mess in our cowboy town makes you wonder who are the guys governing the place. If Singapore Inc was ever asked to fill in a table indicating the identities of their key technical and professional staff, maybe a line will be drawn across the table with only one word typed in: “Outsourced”.