In response to Ian Buruma's article in NYR ("The Singapore Way, 19 Oct, 1995") which made reference to a journalist who lost his job for writing something critical of the government, the unnamed person wrote "I am that nameless entity". That person was Janadas Devan.

Janadas took pains to elucidate that he was not an employee of any newspaper, he merely wrote a column on a freelance basis. For reasons that remain unexplained, but which were clearly not journalistic, the column was halted.

According to Wikipedia, Janadas Devan is a Singaporean journalist and a former Review Editor of The Straits Times. He is the son of C.V. Devan Nair, the third President of Singapore.

On 27 October 2007, Janadas wrote the article "377A debate and the rewriting of pluralism" in which he rebutted  the outrageously homophobic parliamentary speech of Nominated Member of Parliament Thio Li-ann (she of the "anal sex is like shoving a straw up your nose to drink" infamy). In his 7 July 2007 article, "Can mum, mum and kids make a family?" Devan advocated the formation of same-sex marriages in Singapore,  citing the instance of a personal female friend in the United States who had married another woman, has two healthy children and living an "otherwise normal life". As of 2008, Janadas contributed regularly to the Straits Times. 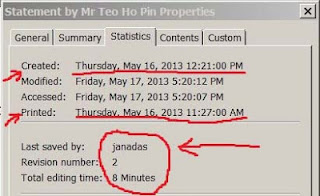 Is this Janadas Devan the ghost writer of Teo Ho Pin's long winded missive with which he attempted, again, to weasel himself out of the perverse justification of the AIM transaction? Janadas is currently Chief of Government Communications at the Ministry of Communication and Information (CGC), a role better known in the prevailing parlance of the lesser mortals as spin doctor. He will need all the penmanship skills at his command to rewrite Devan Nair's scathing epitaph for Lee Kuan Yew:


"Lee is gifted with a brilliant brain and an eloquent tongue. But the capricious gods omitted to equip him with the saving grace of that essential wisdom which makes for true greatness. And Singapore thereby missed the infinitely more potent miracle of the political and spiritual success it might so easily have provided, as a practical, living demonstration to the other unhappy, struggling, heterogeneous nations in Southeast Asia, not merely of singular economic achievement, but also of the eminent viability of a free, open, sane, and equal multiracial democracy, worthy at once of economic, political, and moral emulation."


Devan Nair and James Puthucheary et al spent serious time in jail to free us from the shackles of British colonialism. When fathers and sons end up on opposite banks of the political divide, the expression that comes to mind is that the apple has indeed fallen far from the tree.