More Cracks In The System

Call it another crack in the system. No, we don't mean the latest crack that caused another delay in the south-bound train service between Yio Chu Kang and Ang Mo Kio. And this crack was not at the welded joints, for which a contractor was prematurely named in a preliminary assessment as the party involved in all cracks that appeared at welded joints.

This time the crackheads wear blue uniforms. Sergeant Muhammad Kaldun Sarif had testified in open court he decided not to dust for finger prints or take DNA swaps at a crime scene because he "made a preliminary assessment" of suicide. It must be the kind of stirring Singapore police initiative that Kishore  Mahbubani lauded as "at least as competent, if not more competent, than the FBI".

Ambassador to the United States Ashok Kumari Mirpuri proved just as competent, buttressing Sgt Khaldun's tenuous presentation by explaining that police protocol were operational guidelines, and were not prescriptive.  In other words, SOPs (standard operating procedure) are for wimps. The Singapore Armed Forces (SAF) training officer who used one smoke grenade too many and killed Private Dominique Sarron Lee must have been operating on the same guiding principles. Now you appreciate why Singaporeans are weary of rushing in to help someone lying on the street. A giddy sergeant may "make a preliminary assessment" of assault, and taser you first, ask questions later.

The good ambassador was objecting to the ABC and Fox News coverage of the Shane Todd coroner's inquiry. For reporting on Singapore news, these two could potentially face the wrath of Media Development Authority (MDA), when latter gets their Yaacob Ibrahim inspired licensing act in place. Which means MDA will demand the story to be removed within 24 hours, or forfeit their S$50,000 performance bond. Ambassador Ashok sent his letter to Associated Press, which was copied to Washington Post and CBS, meaning ABC and Fox News are not the only news agencies updated of the cracks in our system. The Americans must be wondering what kind of crack is smoked in our little red dot.

On a tragic note, dengue claimed its first life when a youth was prematurely discharged from Tan Tock Seng Hospital (TTSH) inspite of their doctor's assessment that his platelets were still low. The prescription given was to go see a General Practioner to monitor his blood count. 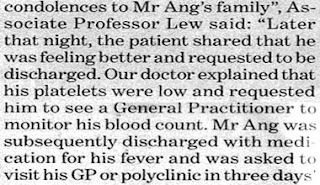