On Wednesday 19 June 2013, international rights groups struck out at the Jordanian government who made amendments to their press and publications law last year to regulate "electronic publications," requiring local news websites to register with Jordan's Press and Publication Department (PPD) and obtain a license. PPD has insisted that "the decision does not seek to restrict freedoms," and that "the objective is to organise the work of these websites." Why does this sound so familiar?

On 14 June 2013, the Asia Internet Coalition (AIC), comprising eBay, Facebook, Google, Salesforce and Yahoo! Incorporated had written to Information Minister Yaacob Ibrahim, expressing their concern that his draculian licensing scheme implemented on 1 June 2013 could hamper Singapore's ability to continue to drive innovation, develop key industries in the technology space and attract investment in this key sector. They also opined that the scope of the regulation and manner in which it was introduced have negatively impacted Singapore's global image as an open and business-friendly country.

The impact of censorship on the business community is highly debatable - money making deals have always triumphed over scruples like moralising - but if investments for innovative technology are threatened, the minister responsible may have sleepless nights coming.

The Global Innovation Index (GII) is co-published by Cornell University, INSEAD and the World Intellectual Property Organisation (WIPO). The GII is a recognition of the key role that innovation serves as a driver of economic growth and prosperity. According to the  6th edition (2013) released on Monday 1 July, Singapore tumbled out of the top 3 to 8th position. This was attributed to more emphasis being placed on innovation output, such as creativity on the Internet, licensing trademarks under the Madrid system, patents, R&D and exports. Our country's economic growth and prosperity put to risk by licensing and patent issues? The jokers involved should be charged for treason. 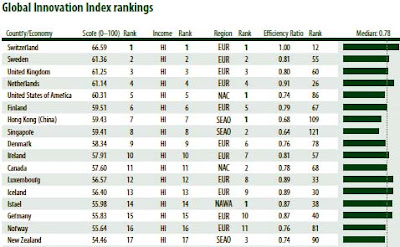