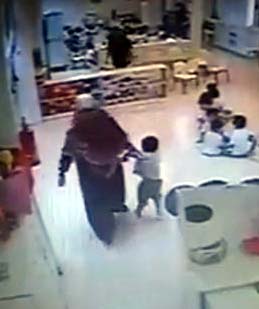 This is a scary picture. What kind of parent will leave her charge in the hands of a masked stranger?

The human face provides important cues for recognition of both individuals and emotions, cues instrumental for the fight or flight decision in a life threatening situation. Developmental psychologists have long been interested in face recognition because faces provide an early channel of communication (prior to the onset of language) between child and caretaker. It is generally recognised that, from birth, infants possess rudimentary facial processing capacities. Jeffrey and Rhodes ("Insights into the development of face recognition mechanisms revealed by face after effects", British Journal of Psychology 102 (4): 799–815) said that faces "convey a wealth of information that we use to guide our social interactions. Even infants at seven months are able to comprehend facial expressions as social cues representing the feelings of other people, an important development of the early warning system for the dangers of interacting in an adult world. Those who are not developmentally impaired grow up to be streetwise, others end up as trusting souls, forever falling for one scam after another.

The chief executive of the National Trades Union Congress (NTUC) First Campus, Mr Chan Tee Seng, needs to explain to parents how staff are recruited for his childcare arm of the NTUC First Campus Co-operative. The faceless child abuser had worked at Toa Payoh Lorong 4 branch of My First Skool (MFS) on a part-time basis since 2009. In all those years, Chan needs to explain how the teacher performance review was conducted.