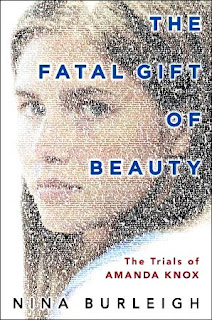 "The Fatal Gift of Beauty" is the true story of the trial of Amanda Fox, an American exchange student convicted of the murder of another exchange student, British Meredith Kercher, in the university town of Perugia, Italy. The disturbing elements of the case - conspiracy, corruption, false accusations, police incompetence, abuse, lies and manipulations - highlight a judicial system warrants closer inspection.

A peculiarity of Italian law - by Anglo Saxon standards - is that judges and prosecutors are technically on the same side, even though judges are supposed to weigh evidence impartially. It is not uncommon to find judges and prosecutors lunching together during trials, "ex-parte" meetings forbidden in American courts.

Defense lawyers working in the Italian system are also at an institutional disadvantage. Although prosecutors must theoretically share evidence with the defense, in practice they do not. In the United States, since a 1963 Supreme Court ruling, withholding of exculpatory evidence (so-called Brady materials) from access by the defense team is ground for dismissal of a case. "Theoretically, the prosecutor must give all the evidence to the defense before the trial," said one cynical Perugia lawyer, adding, "In Italy, everything is theoretical."

Investigative journalism as practiced in the UK or USA does not exist in Italy, ranked 79th in press freedom in 2009. In the Amanda Fox case, Florentine newspaper crime reporter Mario Spezi was picked up from his house and thrown into solitary confinement after Spezi's investigation into the case seemed to be deviating from the prosecutorial line.

And there was the police bungling of evidence at the crime scene - they had to concede that traces of DNA material they collected were what's known as "low copy number," meaning that the sample was actually too small to be objectively determinative of anything. The Perugia police clearly did not have the CSI expertise for a high profile case, but they did dust for finger prints. However, when the prosecutor was asked how wide a net investigators had cast in testing fingerprints at the site, she said, "We didn't compare them with Obama's fingerprints, why would we?" After the verdict was announced, Donald Trump urged a boycott of Italy.

Author Nina Burleigh wrote more than a murder story, meticulously researched and documented, it is also a look into how the legal system in a third world country works.