Ultimate Stakeholders of the Fund

The last we saw of him was the indelible image of a grown man bawling his eyes out like a baby on national television, after learning that his salad days as full cabinet minister was over. Not only will he no longer enjoy a guaranteed million dollars each and every year, the ultimate status symbol of his residence being guarded by a daily 4-shift change of Gurkhas will also be a thing of the past. Of course his pains were soon soothed by juicy appointments with GLCs and other similarly related organisations.

Lim Boon Heng, 65, is flagged as the successor to Dhanabalan, 75, for the chairmanship of Temasek Holdings. Lim was Minister Without Portfolio for 8 years (1993-2001), and then Minister in the Prime Minister's Office  for another 10 (2001-2011). Same job, different name, and nobody is any wiser how he earned his money. If Lim Swee Say is pleased as punch about his CPF statements, imagine Lim being delirious over his bank balance. Definitely not something to cry about.

The finance professor of a local university was spot-on when he suggested that if they decide to appoint him, it would be because of his political background rather than his financial experience. Flowing along similar non-politically correct lines, he segued into the more obvious, "It is probably more important that the incoming chair possesses the requisite management skills and has a strong sense of duty to the ultimate stakeholders of the fund, that is, Singaporeans."

Lim joined Temasek's board of directors just last year. He was appointed a member of the powerful executive committee which has the authority to approve new investment decisions. That takes care of the resume. Naturally, his more important role is to maintain the fairy tale, such as "Temasek only manages its own investments and assets. It doesn't manage our CPF savings." Okay, that should explain why the sovereign fund lives it up on 8.86 percent (one-year return to shareholder, the 10-year and 20-year numbers are higher) while the CPF doles out 2.5 percent. As Clinton would say, "define stakeholder". 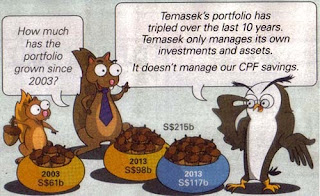