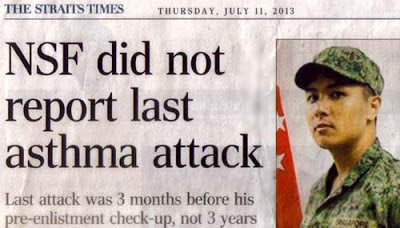 The safety recommendations stipulated no more than two smoke grenades, thrown at least 20 metres apart, at least 10 metres away from the closest troops involved in the field exercise. Platoon commander Captain Najib Hanuk Muhamad Jalal was there, Chief Safety Officer Captain Chia Thye Siong was there, both were aware of the Training Safety Regulations (TSR) when six grenades were expended. Private Dominique need not have died.

So why is the Ministry of Defence trying so hard to absolve themselves of accountability?

Private Dominique Sarron Lee had declared his last asthma attack was 3 years prior to his pre-enlistment check-up date on 4 Jan 2011. Unfortunately he forgot, or forgot to mention, he was treated by a general practitioner for a relapse on 25 Oct 2010. Or maybe he was too gung ho to serve his nation, and did not want to be seen as a wimp hiding behind a desk. Or saving babies' lives in a hospital. Or polishing test tubes in a laboratory. We'll never know, dead men tell no tales. Nevertheless, he did check "yes" in the box for asthma/lung disease. And he was certified combat-fit by the SAF Medical Classification Centre.

When asthma is in remission, it's not necessarily gone for good. One out of three kids who beats asthma by age 18 gets it again by the time they're 26. (Sears MR, Greene JM, Willan AR, et al. "A longitudinal, population-based, cohort study of childhood asthma followed to adulthood", New England Journal of Medicine 2003; 349:1414–1422)

A combat medic testified earlier when the coroner's inquiry started in April that he was not trained to deal with asthma attacks. He has now clarified that SAF medics are indeed certified in basic cardiac support and in dealing with with asthma. The revision in sworn testimony was attributed to an attack of nerves.