The fire was so insignificant, it took only 20 minutes to put out. Or so we were told. Then the number of cables damaged was revised from 33 to 51 on Thursday morning, when normal service was supposed be restored by 6 am of same day. This was subsequently changed to 7 am on Friday for corporations affected, and 7 pm for residential services.

Something was already wrong when internet services went on the blink at around 3 pm on Wednesday afternoon. The Singtel hotline was no help, with their useless robotic responses and irksome elevator music. About 2 hours later, a pre-recorded message made reference to a fire at their Bukit Panjang exchange. Another couple of hours later, even the hotline gave up the ghost, inundated by irate callers. The radio or television broadcasts provided little or no clues. It was only much later at night that the scrolling news feed made cursory mention of the cable meltdown at Singtel. Onscreen the videos were about a fire in Bangladesh (?) or some disaster in other faraway countries. Could this be due to one clown's grouse about Singaporeans focusing attention on the roof collapse at a Jurong shopping mall, instead of the shoot out at a Nairobi shopping mall?

100 mobile base stations, 60,000 fixed broadband lines, around 30,000 mioTV customers, and around 30,000 voice lines were affected. As of Friday morning, the total number of cables damaged was updated to 149. As for the accounting of information coming in by dribs and drabs, we are told the fibre chamber - one of three at the exchange - measured "only 40m by 5m". Meaning it took a long while for someone to dare venture into the actual site to assess the exact scale of the disaster. Minister for Communications and Information Yaacob Ibrahim said he was “quite happy” with the way SingTel handled the disruption.

While waiting for the service LED on the modem to come back to life, many Singtel subscribers must have wished they have an alternative access to the world wide web.

When the data cables were laid for the distributed communication system (DCS) at Pulau Seraya Power Station, we were surprised that the industry standard dual pair of ethernet lines - one active, one on standby mode - was considered insufficient redundancy protection by the power engineers. They had insisted on another dual pair, routed separately, in case an errant forklift truck or excavator should cut into one pair, and trigger a national blackout. This was one wise career move.

The companies whose services were brought down by Singtel, including ATMs operated by DBS, UOB and OCBC, must have wished they had satellite dishes installed for internet access. Only corporations are permitted to have such equipment, private residential homes in Singapore are barred from receiving signals from the sky. Malaysia, Indonesia and Thailand have no such ban from this communication alternative. 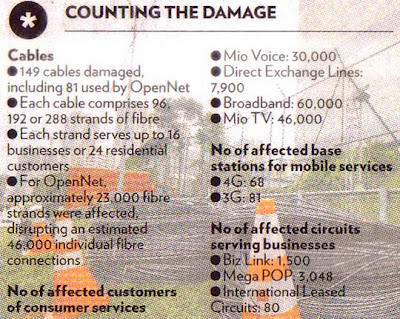