Half Empty Or Half Full 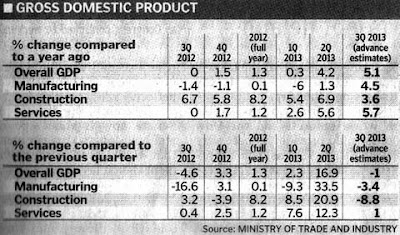 Is the glass half empty or half full? Should you break out the bottle of champagne to celebrate? The lame stream media boasts of "strong showing" due to recovery in manufacturing and expansion in services that resulted in better-than-expected third quarter growth of 5.1%. Just the thing to kick in a GDP related bonus.

Look at the table carefully. The bottle half has more negative numbers.

Vishnu Varathan, senior economist at Mizuho Bank told CNBC on Monday, pouring cold water on the jubilation, "I expect growth to be rather volatile. Singapore is vulnerable through trade and financial channels, I think it's going to be a bumpy recovery." He was pointing to the advance estimate showing the city-state's economy shrinking 1.0 percent on quarter in the July-September period, instead of a gloomier expected 3.6 percent contraction, and a significant deceleration from 16.9 percent growth in the previous three months. Hang on to those bonus cheques. Unlike Ngiam Tong Dow's astute observations, once issued, these cannot be retracted.

Somebody gets the credit, and somebody gets shafted when the economy tanks. Singapore’s Minister of Finance, Tharman Shanmugaratnam, was just named "Finance Minister of the Year 2013" and is slated to receive the award during a private presentation at the World Bank/IMF annual meetings in Washington this week.

In conferring the award, Euromoney painted Tharman as having played “an over-arching role in enabling Singapore to shift its growth model from population-driven to productivity-driven expansion”. Euromoney must have missed out on the Population White Paper report. As for productivity, they should check up on the Ministry of Manpower (MOM) website to get a better picture of the struggle to stay above water. Business Times ("Need to tweak policies on productivity and workforce") summarised it quite succinctly:


"It is indeed vital for Singapore to reduce reliance on cheap foreign labour and raise productivity. This mantra needs to be taken more seriously and more effort needs to be put in place, especially if we want to reduce the widening gap between top and low earners here."


IMF must have good reasons for the vote of confidence. It was in September 2009 when Singapore first announced it will "significantly expand" its contribution to the resources of the International Monetary Fund (IMF) to the tune of 2 billion U.S. dollars under its New Arrangements to Borrow (NAB). This represented an increase of US$1.5 billion from the then existing contribution under the NAB. Singapore had been a contributor to the NAB since its inception in 1998.

Questions were raised in Parliament in July 2012 about the US$4 billion generosity pledged to the IMF. The Prime Minister's explanation was not convincing: “In the event that Singapore’s commitment is tapped upon, the money will not come from the Government Budget." As long as the Monetary Authority of Singapore (MAS) has unfettered access to the cookie jar via all sorts of inventive accounting entries, there is nothing to stop the Singapore government from making bad investment decisions and squandering our hard earned reserves. Once again, is the glass half empty or half full?