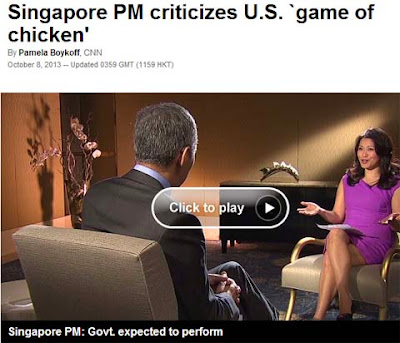 According to CNN International, Singapore's prime minister openly criticized the United States over the government shutdown and ongoing deadlock over the debt ceiling, calling them "problems you have created for yourself in a game of chicken."

CNN's interviewer Patricia Wu turned the tables back on him, asking if the U.S. would benefit from a system like Singapore's, where government ministers are paid hundreds of thousands of dollars (actually the figures are in the millions) in salaries. Predictably, Lee gave the stock answer, that he believes his country runs a clean system in which officials are paid "what their job is worth and what the quality of people is worth." Lee actually said, "We may have competitive salaries but we are far from being the richest law makers in the world."

The game of chicken, as played out in the local context, is "Killing the Chickens to Scare the Monkeys". Quite different from the game of chicken (also referred to as playing chicken) in which two players engage in an activity that will result in dire consequences unless one of them backs down in time.

No local media journalist would dare to play that game. Even to call out the obvious white lies about "competitive salaries" and "far from being the richest". In April this year, the New York Times reported that President Barack Obama will voluntarily return 5 percent of his US$400,000 annual salary to the United States Treasury, in a demonstration of solidarity with federal employees who are seeing pay cuts or furloughs as a result of sequestration. To avoid embarrassing Mr Obama, Lee's salary, even after the token reduction to regain a few votes, will not be printed here.

Grace Fu's personal reaction to the compensation adjustment has been immortalised by her Facebook posting: "If the balance is tilted further in the future, it will make it harder for any one considering political office." Now, that line sounds more like a game of chicken. Thanks to her subsequent promotion, her family "would not suffer a drastic change in the standard of living even though I experienced a drop in my income".