There is a new study out this October that ranks the status of teachers in various countries. It’s called the “Global Teacher Status Index ” and is published by the Varkey GEMS Foundation. The data was collected by the polling company Populous, which used a web based survey (WBS) instead of a conventional face-to-face (F2F) approach because, amongst other considerations, WBS is cheaper and faster. The Global Teacher Status index is the world's first comprehensive attempt to compare the status of teachers across the world. 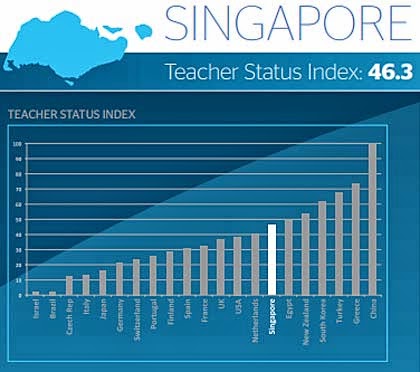 Singapore ranked 7th in the Teacher Status Index, with a score of 46.3. Apparently only a small percentage of Singaporeans believed children don't respect teachers, despite horror stories of pedophiles being awarded Ministry of Education scholarships, and school principals jailed for proclivities for under aged online prostitutes.

On the other hand, the majority of respondents believed that the fair wage for a teacher should be below what they are actually paid. As a matter of fact, they believed the teachers are overpaid by as much as 14 percent, since the average "qualifying teacher wage" of US$37,144 (S$46,400) is the highest among the all the nations in the study ("qualifying teacher wage" in USA is US$25,770). At least that's consistent, our prime minister is the highest paid among all the nations in the world.

It is no wonder that four in five respondents here — the fifth-highest proportion among the 21 nations surveyed — said they would encourage their children to pursue a career in teaching. Which parent wouldn't shove their kids in the direction of the big bucks? It looks all the money invested in private tuition may pay off after all.