A Sight For Sore Eyes 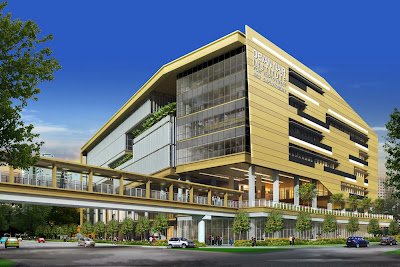 You gotta see it to believe it. Located at Jurong Street 21, and winner of the BCA Green Mark Award 2013 (Platinum), is a brand new building with the name emblazoned in big bold letters:
Devan Nair Institute for Employment and Employability.

It is the site of two new centres set up by the National Trades Union Congress (NTUC) to support low-wage workers and professionals, managers and executives (PME). NTUC Secretary-General Lim Swee Say himself was the one who announced the "one-stop centres" during a dialogue session with union leaders at the institute on Tuesday, 3 September 2013. Will miracles never cease.

Devan Nair is the ex-president who resigned under contentious circumstances in 1985. Prime Minister of the day Lee Kuan Yew aired the dirty linen in Parliament about alcohol fueled fondling of nubile lasses in Borneo longhouses during a state visit, attributable to alcoholism which Nair vehemently denied. For a while, his blackened name was acronym for No Alcohol I Resign.

In 1999, the Canadian newspaper Globe and Mail was sued by Lee over an article about the acrimonious parting of friends. Lee's press secretary Yeong Yoon Yiong challenged the New York Times for reporting the suit was dropped because of a countersuit filed by Nair:


"In fact, the suit also took issue with defamatory allegations that Nair made against Lee, and Lee agreed to discontinue it only when two of Nair's sons issued a statement, reported in the Globe and Mail on July 1, 2004, maintaining that Nair was no longer mentally competent to give evidence in court."


The sons' statement acknowledged that "the article quoted Nair as saying that Lee had Singapore government doctors slip hallucinatory drugs to Nair to make him appear befuddled." And the statement concluded that "having reviewed the records, and on the basis of the family's knowledge of the circumstances leading to Mr. Nair's resignation as president of Singapore in March, 1985, we can declare that there is no basis for this allegation." It was a biggy when Lee turned on his comrade-in-arms who spent serious time in prison to fight the colonial Brits. That his own flesh and blood would turn against him must be worse torment than a dank British cell..

One of his sons is none other than Janadas Devan, Chief of Government Communications at the Ministry of Communication and Information (CGC). More famously, he gained notoriety as the ghost writer of Teo Ho Pin's long winded exposition about the Action Information Management (A.I.M.) dealings. Janada's pensmanship may come in useful again if Lim Swee Say needs a fairy tale accounting of the naming of the building at Jurong Street 21.