Hours after being convicted for 6 charges of corruption and sentenced to 5 months in prison, law associate professor at the National University of Singapore (NUS) Tey Tsun Hang was dismissed by his employer. Tey claims that Dean of NUS Law Faculty Simon Chesterman had telephoned to apologise a few days later, saying that he had merely been the executor of orders from upstairs.

It would have been nice to have Lieutenant-General Desmond Kuek apologise for the sacking of blogging trainman "Gintai", citing similar lame excuse of merely being the executor of orders from upstairs. It would fit nicely into the template of rule by law, not of law. Really langgar.

SMRT Director for Media and Marketing Communications Ms Boey said that his "misconduct" would have compromised the public as well as his own safety, giving impression that Gintai was a recalcitrant repeat offender. Boey would not divulge further how many times he was counselled and how many warning letters he had ignored. Apparently entering the train via the rear cab instead of the front one was deemed an act of "compromising safety and security breaches." By those draconian standards, the CEO who stinged on maintenance to maximise bonuses should have been sent to the firing squad.

Gintai may have dedicated 18 years of his working life making sure the trains were launched on time, but he compromised his own safety and security when he blogged from 20 Oct 2011 to 20 Oct 2012. Unbeknownst to this innocent soul, his career was already derailed when some Benedict Arnold of a grassroots volunteer delivered him to the den of K. Shanmugan over a post on affordability of HDB flats. Be aware of smiling tigers. The Bard had warned:


Where we are,
There's daggers in men's smiles: the near in blood,
The nearer bloody.


Gintai was also accused of passing an underground station without stopping, but the experienced train officer knew it was on auto mode. What he is learning the hard way is that the executing hands are always in control, always on the look out to fix the opposition. Whether the SMRT CEO was another pawn, like Simon the law faculty dean, or the one with finger on the firing button is another addition to the skeletons in the cupboard. On the day of reckoning, those with stained hands will have a hard time hiding:


"Here's the smell of the blood still. All the
perfumes of Arabia will not sweeten this
little hand. O, O, O! " 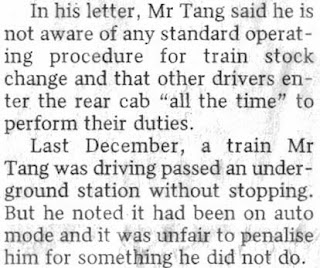