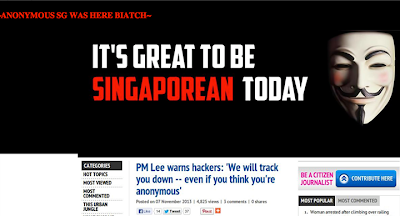 When he was just a minister of state, Lee Hsien Loong boasted to journalists covering his Europe tour he could tame the internet. A foreign reporter tried to educate him, and was dismissed haughtily: "We have the technicians."

This guy never learns. It seems his official website was hacked yesterday, Nov 7, 2013, at 11.17 pm and presented with a rude message: "ANONYMOUS SG WAS HERE BIATCH"

It was an inevitable response to a challenge issued earlier, "PM Lee warns hackers: We will track you down -- even if you think you're 'anonymous'".  Lee had told local journalists that his government would "spare no effort" in going after Anonymous members who week threatened to wage a cyber war against the Singapore Government.

Confirming the successful forage into the sanctity of his ivory tower office - a vulnerability in a subpage was exploited to display pages from other sources - the government's red-faced Infocomm Development Authority of Singapore (IDA) issued a statement today saying it was investigating the incident. Assuring the nation everything is hunky-dory, IDA declared: "The PMO (Prime Minister's Office) main website is still working, and we are working to restore the page that has been compromised." Not that we give a damn, the target was the government, not the country. You can't believe everything the Straits Times says.

There's no gainsaying this time, the police is not expected to issue a follow-up statement about technical glitches or router failures. It looks like Anonymous is still determined to wage further attacks on the ham-fistedly governed island's technological infrastructure if demands for greater Internet freedom are not met, specifically Yaacob Ibrahim's thinly disguised assault on the Internet via frivolous licensing rules.

It's great to be Singaporean today.