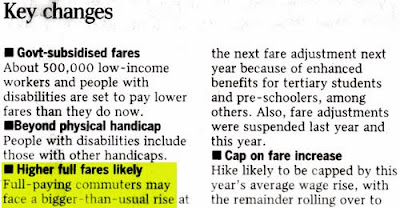 It boils down to this: will you buy a used car from this guy? Transport Minister Lui Tuck Yew pledged before the House that the discounts given will more than offset any fare increase in the next fare review exercise. Maintaining the same poker face, he segued on to the part about fares not being less affordable for the average commuter, and more affordable for the low income and disadvantaged groups. Everbody else pays more. The perverted Pareto principle states that 80% of the effects (increases) come from 20% of the causes (rebates). Not in this Singapore version of Tricky Dick's vocabulary is the option of reducing fares by maximising cost efficiencies and higher productivity.

Big deal, transport firms will give part of extra revenue creamed from rise of fares to enhance travel vouchers to the poor. Lest we forget, only half of 200,000 vouchers were taken up in 2011. What was not collected, was siphoned back into the stash fund of the greedy buggers.

Just as duplicitous was the keechiu general, who distributed his "rainbow-colored chart of a range of aids that gives bigger sums to the low-income". For instance, with ComCare, more than 8,500 citizens receive up to $108 a month in kindergarten subsidies. Then Dr Intan Azura Mokhtar (Ang Mo Kio GRC) had to prick the bubble by pointing out that a wait of two to four weeks for ComCare frustrated her residents. Her call for "front-line staff to be more flexible in giving help" confirms someone else was also speaking with a forked tongue when Foreign and Law Minister Shanmugam issued his challenge for anyone to find a government that is more "welfarist". We'll believe the guy when the poor can collect food stamps from welfare centers instead of having to grovel at a meet-the-people session.

There's good reason why the Government studiously avoids the "w" word, it also exposes the abuse of the "s" word. Explaining "a hard cash subsidy" for housing goes to 83 percent of the population, Shanmugam disabused claims of HDB profiteering by repeating the fantasy that it has to pay market rates for land, and the money goes into the reserves. We may not have typhoons blowing our way, but we batten down the hatches for the worst each time another "subsidy" is announced.