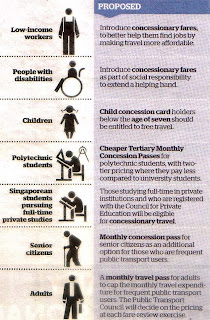 At first glance, it would appear that Christmas is early this year. The Fare Review Mechanism Committee (FRMC) seems to have come up with sweeteners to soothe the pains of the commuters, punching the right buttons to address poly students, physically challenged, lower income, senior citizens and kids taller than 0.9 m.

The worrying part is when they start rambling on about "judicious balance" between affordability of fares and profitability of private operators. You can easily spot someone has his thumb on the scales when the FRMC freely admit that they have "tweaked the fare formula to ensure their (operators) businesses remain financially sustainable".

One significant fare "reduction" in the list of recommendations is the pricing of the new monthly "hybrid" pass for polytechnic students, $52.50 instead of previous $97.00. The bugbear that remains unresolved is that the hybrid figure is an arithmetic sum of the $27.50 bus concession and the $25 train concession. One who has taken a bus to school would have wasted the prepaid train fare to the same destination. Surely a logical computation of the fare should be somewhere in the middle, say $40. You can bet your bottom dollar they won't tweak that formula in favour of fair play for all. Once again, proof that profit considerations triumph over commuter concerns of affordability.

One opposition party stated the rather obvious: "It should not be the Government's responsibility to safeguard the profits of SMRT and SBS Transit, which are commercial entities". The cynics may add: or protect the luxurious lifestyle of "retired" army officers and favoured cronies.