Leave Politics Out of It 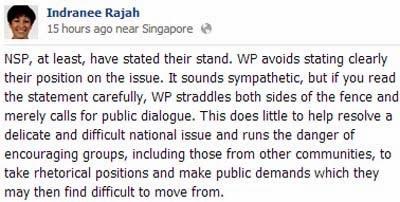 Senior Minister of State for Law and Education Indranee Rajah said that two opposition parties -- the National Solidarity Party (NSP) and the Workers' Party (WP) -- have presented the (hijab) issue as a simple, straightforward matter with no trade-offs or downsides. Further, she said that the WP "straddles both sides of the fence and merely calls for public dialogue", which does little to help resolve the "delicate and difficult national issue".

What the NSP said: "NSP supports the wearing of hijab in all places of work and study."
What the WP said: "As a principle, WP recognises the genuine desire and aspirations of Muslim Singaporeans who seek a change in government policy to allow the wearing of the hijab in the public sector’s uniformed professions."

Enough of the he said, she said. Indranee may choose to ignore it, but the albatross around her neck has to do with the unwelcome advice from one nonagenarian to "be less strict" about one's religion. There's no doubt about it, though some may choose not to wear the hijab for personal reasons, there are those who maintain it remains obligatory and non compliance is considered a sinful act. In like manner, Christians are not supposed to imbibe alcoholic beverages, and Buddhists have their dietary abstinences. Each religious follower has his/her own cross to  carry, and has their own deity to account to. How did Muhamad Faisal bin Abdul Manap (Aljunied GRC) phrase it? "WP is of the view that the current hijab discussions should not be politicised."

We had a colleague who confided to us (non-Malays) the trepidations she faced when deciding on donning the veil. Her own husband emphasised the seriousness of the issue - once undertaken, the commitment cannot be easily reversed. It was her personal choice, and our esteem of her performance in the work place was not affected whether her head was covered or uncovered. It's difficult to explain such visceral matters to people who don't believe in a supernatural entity. People who believe only in material things in this world, and forget that hell has a different currency.