Which came first, the bonus issue for civil servants or the latest forecast for GDP growth? Hint: the GDP figures are generated by civil servants. Something else to ponder. These guys are overheads, they don't produce any saleable goods or services. Even the Population White Paper was a pathetic attempt at hard sell. 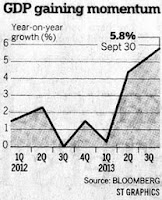 The official spiel is that the third quarter saw a 5.8% spurt during the months of July through September. As a result, the Ministry of Trade and Industry (MTI) now expects the economy to grow 3.5 to 4%, up from previous 2.5 to 3.5%. Even before the full year is over, 2.5 months bonuses have been announced for the civil servants (mid year bonus of 0.4 month plus 1.1 month variable bonus plus 13th month). The 1.1 month bonus rides on the forecast of 3.5 to 4.0% this year, "buoyed by a slight pickup in the global economy and domestically oriented sectors".

The real world tells a slightly different story. Economists warn of the uncertainty of United States Federal Reserve's tapering of its monetary stimulus program and potential flare ups in the euro zone. Others expect sluggishness in Indonesia and China might hit growth. Closer to home, restructuring and stricter foreign worker policies may constraint the extent Singapore can ride a recovering global economy. International Enterprise Singapore went further to downgrade its 2013 forecast for non-oil domestic exports, expecting it to fall 4 to 5%, instead of previous 0 to 1 percent growth. Amidst the gathering dark clouds, even MTI said next year's growth will be 2 to 4 percent, down from the 3.5 to 4% used this year to justify the generous bonus payouts.

What is paid out will never be returned. Bookings to learn classic French techniques of Patisserie from Le Cordon Bleu London will not be cancelled. Santa Claus, a private sector employee, may be retrenched in December, but the other guys are recession proof.