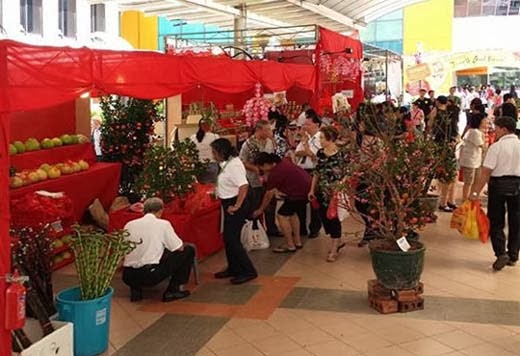 According to Hong Kong feng shui master Alion Yeo, the Year of the Horse starting today is going to be the kind of horse that you shouldn't stand behind - because it incorporates the volatile element of fire: "With this being the Year of the Wood Horse, and with wood being very combustible, there will be a lot of scandals, conflicts, explosions and arguments."

The goon squad from the National Environment Agency (NEA) raided a floral fair at the Hougang Central Hub where last minute shoppers were hunting down flowers like the pussy willow to decorate their homes for an auspicious start of the Lunar New Year. Their quarrel was obviously with the opposition party organising the event, but ordinary residents were not spared the collateral damage. Together with the Aljunied-Hougang-Punggol East Town Council (AHPETC), stall holders were also summoned to appear in court on Feb 18, for manning stalls from Jan 9 to 30, without a licence.

It matters not if the AHPETC had formally initiated communications with NEA over its intention to run the event since Dec 20 last year, "with the nature of the community fair and the benefit to residents clearly stated". Apparently NEA does not engage in civil discourse, they simply resort to the courts to do the dirty work.

Senior Minister Of State For Law Indranee Rajah recently moved a Bill in Parliament to rename the "Subordinate Courts" as "State Courts". While at it, office of the "Chief District Judge" also became the office of the "Presiding Judge of the State Courts". Why not go the whole hog, and call the National Environment Agency the State Environment Agency? Already the Singapore Police Force is carrying on like a State Police Force. It's not just the grass roots organisations that have been politicised as state apparatus, the evil tentacles of the political animals are far reaching and ever more invasive. Baey Yam Keng let the cat out of the bag at the National University of Singapore Students’ Political Association (NUSPA) forum when he confirmed as much, “That is the system here.”

The "Deport Justin Bieber and revoke his green card" petition on the White House's petition website has currently exceeded 100,000 signatures, the number that triggers US Government protocol for White House staff to review it. We should have a similar mechanism to revoke citizenship and deport all  gutter elements in our country.