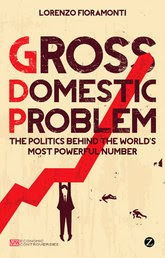 His small book, only 200 pages long, traces the history of GDP, discusses how its formula was developed, analyses the key political and economic interests supporting the use of GDP  and the type of society it contributed to building. It also provides a comprehensive review of the most important criticisms against GDP. Criticisms such as this:


"Will raising the incomes of all increase the happiness of all? The answer to this question can now be given with somewhat greater assurance than twenty years ago... It is "no"... Put generally, happiness, or subjective well-being, varies directly with one's own income and inversely with the incomes of others. Raising the incomes of all does not increase the happiness of all, because the positive effect of higher income on subjective well-being is offset by the negative effect of higher living level norms brought about by the incomes generally." (R.A. Easterlin, 'Does Economic Growth Improve the Human Lot? Some Empirical Evidence', New York and London Academic Press, 1974)


Maybe Warren Fernandez was right when he told his audience at the World Economic Forum meeting in Davos that we attained the Swiss standard of living in 2000 ("we managed to hit the mark”). And yet the choice by Swiss voters to reimpose curbs on immigration is sending shock waves throughout the European Union. With more than one million EU citizens living in Switzerland, there could be far-reaching political and economic consequences to Sunday's 50.3 percent "yes" vote in favor of imposing quotas on foreign workers.

It sounds all so familiar. Maybe mom was right after all, money can't buy happiness.