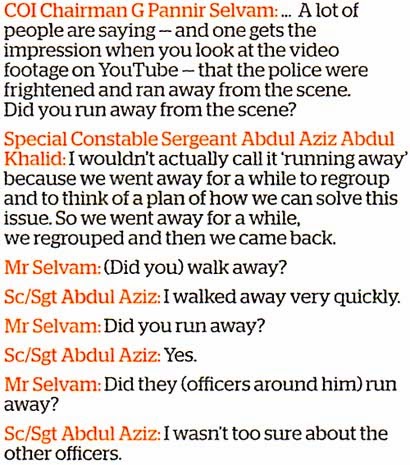 When it comes to communication with Singaporeans, Singlish is often blamed for a lot of misunderstanding. It's not the same problem other countries face. For instance, George Bernard Shaw is attributed to have said, "England and America are two countries divided by a common language." Here, even Singaporeans sometimes fail to understand what other Singaporeans are saying.

When bus drivers stop work, it's an industrial action, not a strike. When roads are immersed under water, it's due to ponding, not a flood. When a track circuit failure occurred on the south bound line between Yew Tee and Kranji MRT stations on Monday, SMRT insisted the incident did not amount to a service disruption as the trains did not stop, "although trains ran at a slower speed." So when SMRT CEO Desmond Kuek says he will continue to make "improvements" to the system, you have to wonder whether he's referring to the language manipulation or efficient train operations.

Committee of Inquiry (COI) Chairman G Pannir Selvam must have wished he had a dictionary in hand when he had to ask pointedly whether the police at Little India "were cowardly or displayed signs of cowardice". Mr Selvam was referring to the impression conveyed by Youtube videos that the policemen were frightened and ran away from the scene - in full panic mode, abandoning expensive cars in the middle of the road. State Counsel Joshua Lim was more blunt with the choice of words for Assistant Superintendent of Police (ASP) Edwin Yong: "Were you cowardly getting into the ambulance?"

Another officer explained "I was not taught how to deal with riots as our training programmes dealt more with anti-terrorism measures". That makes rioters more terrifying than terrorists like, say, Mas Selamat Kastari.

Maybe the cops who lost their innocence at Little India deserve a slice of the Pioneer Generation Package, since everything they did there seems to be a pioneering effort. As in never. done. before. But not everyone wants to be a pioneer. Pioneers, as you see in Western movies, tend to be shot by Indians.