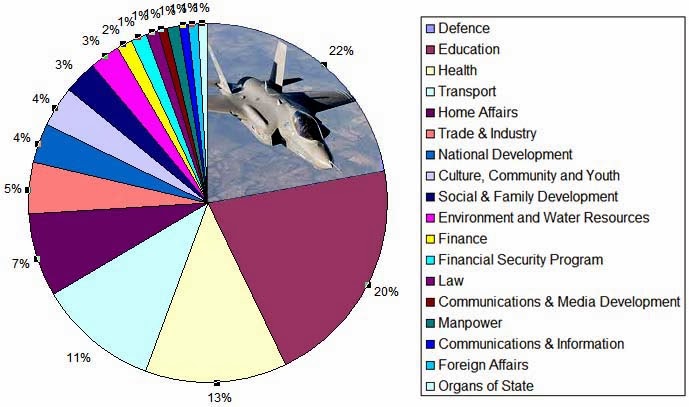 Recently, Lawrence Wong, Chan Chun Sing and Grace Fu were serendipitiously caught on camera, nodding off in parliament as the budget was presented. No wonder, the glaring omission in the grand show and tell was the traditional gee-whiz powerpoint slide-fest favoured by the Old Man. And for good reason too, it would showcase the biggest slice of the pie once again goes to.... (drum roll).... Defence, to the tune of $12.6 billion or 22.2% of the total expenditure for FY2014.

Taking second priority in the grand scheme of things is Education, allocated $11.5 billion or 20.3%. They don't want our kids to get any smarter, not when they can spot a Lieutenant Colonel at Pasir Ris Camp beating the daylights out of a stray dog with an truncheon and recognise that as an act of cruelty to animals. The outraged father said his son and 8 others were threatened to be charged if they did not keep their traps shut, not exactly the best of education in the military honour code.

With all those billions to spend at will, it makes you wonder why they still need the hike in town council charges. Maybe Deputy Prime Minister and Finance Minister Tharman Shanmugaratnam should be blamed for announcing, as part of the budget measures, one-off Service & Conservancy Charge (S&CC) rebates of one to three months. That should be the signal for 8 People’s Action Party-run town councils to get greedy. The other 7 PAP town councils had already jumped the gun and implemented their increase in 2012.

Sembawang Town Council General Manager Soon Min Sin said, “With rising costs, some town councils will run into deficits even with the help of government grants in FY 13/14 and FY14/15 if there is no revision in S&CC.” Some of those rising costs may be traceable to "cost saving measures such as the implementation of LED lights". We don't know where they "leverage on bulk procurements" - hopefully not from some $2 company -  but 4 LED bulbs in a lift should easily cost more than $100, to do the job of a $6 fluorescent tube. Which begs the question, how many PAP town council employees do you need to change out a light bulb.......

The S&CC rates are not exactly small potatoes, they range from $19.50 (one-room flat) to $88.00 per month. Depending on where you stay, the hikes represent 2.5 to 5%, every month, for the rest of your life serving the 30 year mortgage. Tharman's act of kindness is good only for one to three months. 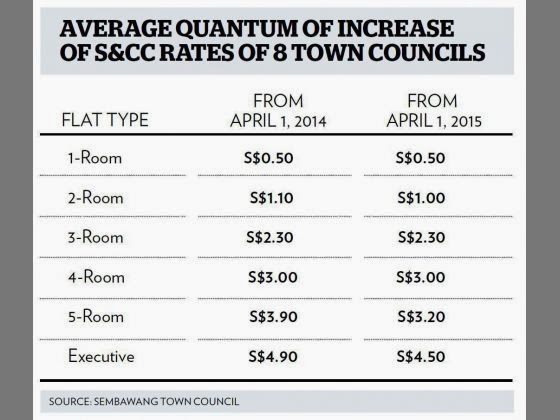