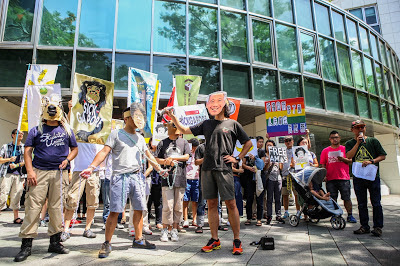 The horrible person thought that by banning the private use of satellite dishes, he could maintain a sanitized version of world events. Thanks to the internet, we know there more important news than the rehash of the Phey Yew Kok blooper, whose train ride to freedom 35 years ago hardly raises an eyebrow. After all, he was the favoured trade union child of the day. A frustrated Dr Lee Siew Choh once pressed Jayakumar, then Home Affairs and Law Minister, for the amount spent on surveillance of Francis Seow in the United States when investigating officers only ventured out to Bangkok to hunt for Phey.

You'll never read about it in the 153rd ranked newspaper, but Taipei Times reported that on 26 June - International Day in Support of Victims of Torture - groups including the Taiwan Association for Human Rights (TAHR), the Human Rights Covenants and Conventions Watch (CCW), the Taiwan Alliance for Advancement of Youth Rights and Welfare and the Judicial Reform Foundation marched on Singapore’s de facto embassy in Taiwan, and called on the government to observe the UN Convention on the Rights of the Child that it has ratified and free Amos Yee immediately.

Wu Yi-cheng (吳易澄), head of Taiwan's Mackay Memorial Hospital’s department of psychiatry, said the misinformation dished out by the Singaporean government and the media about psychiatric disorders is “different from the psychiatry treatment guidelines we’re following now,” according to which patients “recover” rather than being “cured.”


“There are two sides to the [Singaporean government’s] deployment of psychiatry in this case,” Wu said. “On the one hand it seems humane to have those with mental illness receive proper treatment and maintain that they could thereby obtain lighter sentences; however, the [medical claim] could also be subjected to political machination and lose its altruistic essence.”


BTW, don't believe everything they are writing about Phey either. A "media consultant" by the name of George Joseph, is quoted saying "a riot took place at the PIEU office in 1974 when a university student and workers fought with union officers over failed union talks". Even judge T S Sinnathuray had stated in court proceedings that Tan Wah Piow was nowhere inside the room with overturned furniture ("You were standing across the road that day", AWAKENING, 1974, issue 19). It's a perversion of the "a person inside a polling station cannot be said to be within a radius of 200 metres of a polling station" illogic. No wonder the Straits Times is attempting a major rehash of their format this coming week.