A Time For Celebration 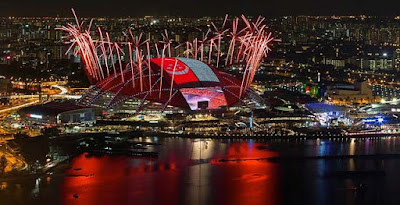 Peak season in Hokkaido is usually during February for the snow festival and July autumn for the lavender season. So why did the prime minister decide to go to Japan in summer when Tokyo temperatures are in the 40s? Even in Hokkaido, we are talking about 28 degrees - warmer than a cool night in Singapore.

The bigger question is why he planned to give the spectacular 28th Southeast Asia Games closing ceremonies a miss? Tickets for the $40/$20/$12 climatic closing show, featuring giant floats and aerial displays set in a festive party atmosphere with live music, have already been sold out. Was he afraid that the organiser would run a last minute repeat of the Balakrishnan request to "revise" the $104 million YOG budget to $387 million? The Singapore SEA Games Organising Committee (Singsoc) had announced that they will spend not a cent more than $324.5 million. To match the YOG scale of debacle would mean easily a billion flushed down the drain.

Lim Teck Yin, chairman of Singsoc's executive committee, had boasted, "This is a special year for all Singaporeans, and Singsoc will strive to deliver a Games that will bring people together in a fitting and memorable celebration." He probably did not count on the fact that someone would rather not be included in the people defined. Never mind that the gold medal tally for Team Singapore has already breached 83, second only to Thailand's 93.

SMRT has announced that train services and selected bus services will be extended for the Closing Ceremony on today Tuesday (Jun 16) and roads in and around the Singapore Sports Hub will be closed or have restricted access for vehicles. Lots of Singaporeans will be in a partying mood - surely not because the horrible people, one by one, are exiting the country?