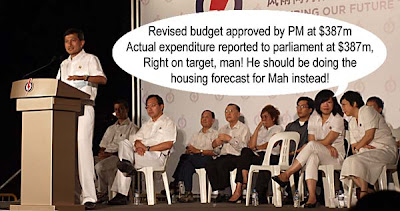 You know you've wandered into a PAP rally when chairs are neatly set up in an open field. The crowd is smaller, and the audience is distinctly decades older than the targeted generation of first time voters. And the speaker on stage is crafting his words solely for the benefit of the mainstream media.

The mystery of why PM Lee didn't apologize on his himself at the Boat Quay rally was dispelled during the opening minutes of Vivian Balakrishnan's speech. He had PM Lee's approval for a revised budget of $387 million, or so we are told, up from the original estimate of $104 million in November 2007. See, all that talk about overspending is a big fat lie. The new mystery is why this number is made available only now, at the penultimate hour, the last lap before the May 7 polling date. There was no mention about this statistic when questions were fielded in parliament about the YOG debacle.  Unexplained also, then and at last night's rally at Clementi Avenue 4, was what went into the "Other Costs" of $79.8 million.

Balakrishnan concocted a story about running into a young man in a LRT train ("He never expected a Minister to ride the train") who asked him about the overspending on YOG. The snake oil dispensed: it's all about the youths. "This is the first and possibly last time an Olympic event will be held in Singapore" and "would make a big difference" to Singapore youths. The big difference as we know too painfully well is that volunteers were given skimpy packet meals (some kena food poisoning somemore) while the foreign guests feasted on gourmet buffet. Some of these helpers were practically forced marched by their teachers into "volunteering". At the end of the day, their certificates of appreciation weren't even signed by the "grateful" organizers. The signatures were photo shopped, just like the wanted posters of Mas Selamat. And the big reward for their sacrifice, a day at Universal Studios, was only good for limited hours, on limited days, and allowed for barely enough time to queue for the big rides. This is almost second nature to the man, strictly in style with his "Do you want three meals in a hawker centre, food court, or restaurant?" type of largess. Batteries definitely not included.

Balakrishnan said he believes young Singaporeans want respect, fairness and a land of opportunities. "If as a political party we cannot address these key needs of young Singaporeans, I think we are in trouble." That was about the only bit of honest truth in his oratory of the night. By that time, you could smell something was burning. Hot air is combustible, don't you know?
Posted by Tattler at 8:32 AM