Just Look At The Scary Numbers 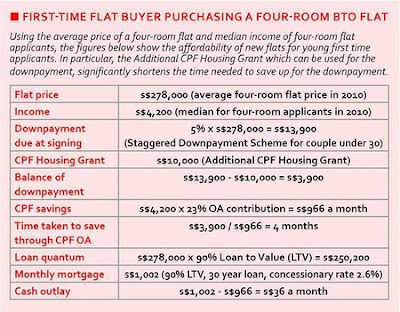 The graphic was supposed to illustrate how affordable Mah Bow Tan has priced HDB housing. In the first place, note that "hardly any cash outlay" in the title head is misleading. Besides the extra $36 in the example needed to top up the monthly mortgage, cash is required for the town council charges, season parking, utility bills, and servicing of the miscellaneous loans for renovation and furnishing. Even if you skimp on the airconditioning, electric fans are not packaged with the flats. Planning on getting married and raising kids? Even if CPF were allowed for that (it's not), the housing loan has eaten up all the funds.

The real killer is that all 23% in the Ordinary Account is tied up for 30 long years. After ORD, and 4 years to save up for the down payment, the ordinary Singaporean male will all likelihood be staring at a zero balance in his CPF account at age 55. And that's assuming a smooth career path through 3 decades, immune to vicissitudes at the work place and/or economic upheavals. There's no welfare system in Singapore, the CPF was supposed to be the safety net for retirement at twilight years. Oh, we forgot, the powers that be have decreed that retirement is no longer an option.

House Price to Income Ratio is the basic affordability measure for housing in a given area. It is generally the ratio of median house prices to median familial disposable incomes, expressed as years of income.  According to Numbeo, the statistic for Singapore should be 17.13 years (It's 6.69 for Kuala Lumpur, Malaysia, 4.69 for Perth, Australia). Which means 30 years for a HDB flat is just too damn long.

It's not like Mah does not know that there's a whole lot of senior people who are going be broke at retirement time. But his solution is guaranteed to make your blood boil: "Move into your children's flat and rent out your old one."
Posted by Tattler at 10:36 AM