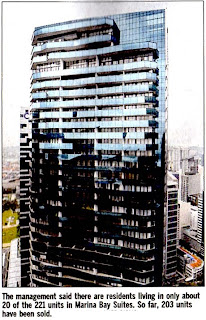 Jesse Colombo, self-styled anti-economic bubble activist, made his charge quite clear in the Forbes article, "Why Singapore's Economy Is Heading For An Iceland-Style Meltdown." He says Singapore is currently inflating "one of the most egregious examples of post-2009 bubbles", and predicts the boom will end in similar (but necessarily identical) manner.

The Monetary Authority of Singapore (MAS) is not about to take that lying down, and be accused of sleeping at the wheel. To deflect the sting of the tight slap, MAS insists that the Government and MAS have taken decisive steps to cool property demand and prevent excessive leverage. It cited Three Facts: 1) new housing loans declining, 2) household balance sheets are strong, 3) property asset values are higher than debts incurred. The latter is that one card which will bring the whole house tumbling down - when asset values fall, you can forget about household balance sheets and loan servicing. As in the debacle of the Marina Coastal Expressway opening, the traffic advisories are issued after the event.

It took a fire on the 65th floor of the posh Marina Bay Suites to confirm the worst of Colombo's fears. We now know more than 90 percent of the Marina Bay Suites are unoccupied. Only 20 of the 221 units at the 66-storey tower have physical residents, the rest of the 203 sold have phantom owners waiting to "flip" their investment, and cash in the chips as they would at the shared namesake casino. The Indonesian owner of one 53rd floor unit may not wait that long, "I bought an apartment in Singapore because it is very safe and clean here. But now I want to sell."

Thanks to the country's bubbles, wrote Colombo, the ranks of Singapore's wealthy is helping to fuel a luxury consumption boom in everything from high-end apartments to exotic cars. Just like in Iceland before the fall. There may be more Marina Bay Suites with similar occupancy rates, and no tears will be shed when the speculators get burned. Unfortunately the madness spreads to the heartlands, where first time owner occupiers end up indentured to a 30 year mortgage for a public housing unit.